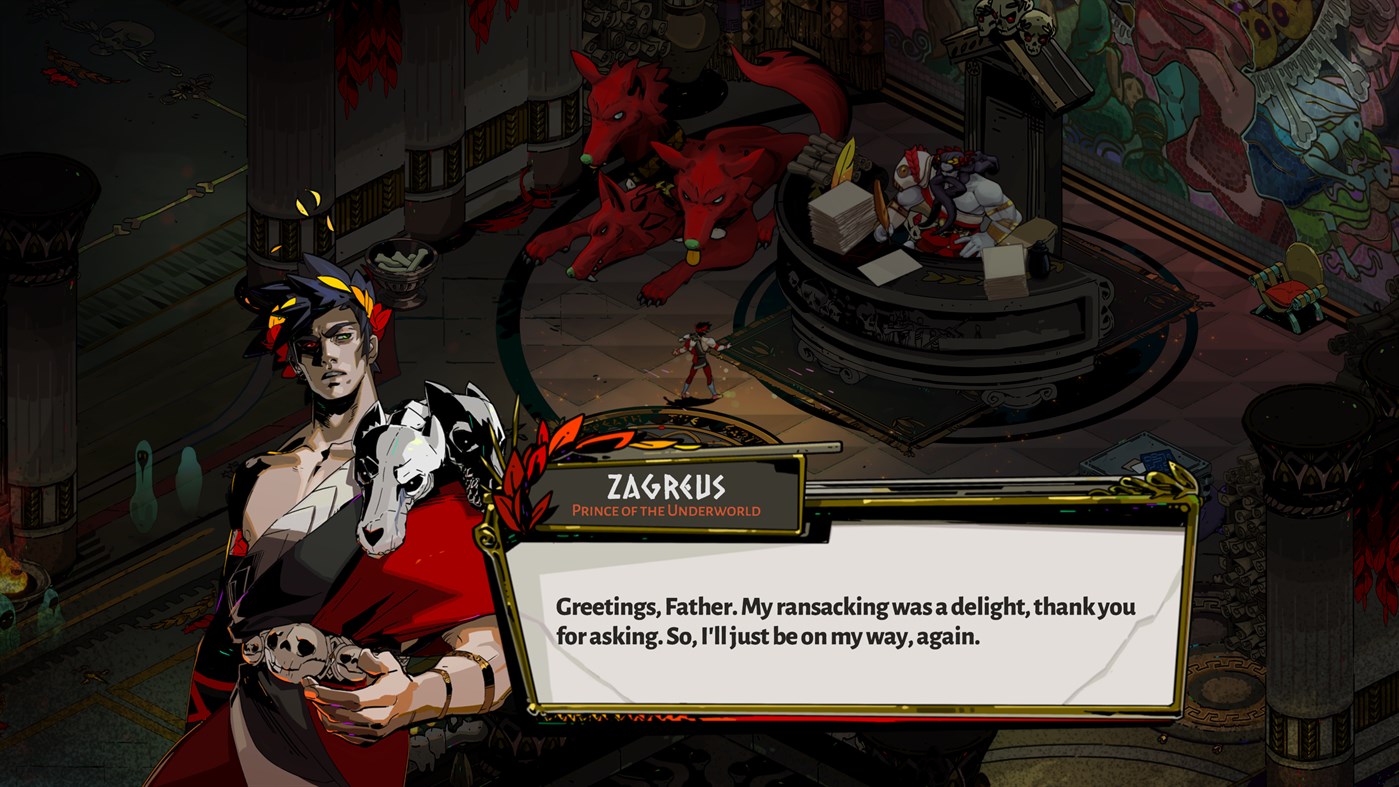 Hades is a superhit for Supergiant Games. It has eclipsed the charts to become one of the highest-rated games on the PS5 and XSX.

Kinda crazy that an Indie Game became the highest rated game on both platform amazing really.
Reactions: DeaconOfTheDank, struggler_guts, Mossybrew and 21 others

Deserved. I forgot how fun it is. Having a blast all over again!
Reactions: LordBlodgett, IKSTUGA, Bluecondor and 4 others

really dont like this type of games, but good for them!
Reactions: Speedwagon, waquzy, amigastar and 3 others

I'm even playing through it a second time after finishing it on my Switch last year. What an amazing game.
Reactions: jaysius, LordBlodgett, IKSTUGA and 3 others

Somewhere only we know =D

Am I the only one who thinks it's just an ok game? Overhyped as hell? >_<
Reactions: habibihijababy, CatLady, Putonahappyface and 30 others

Game also won a good amount of GOTY awards so it has to be making something good. Still need to buy it.
Reactions: Bluecondor

i played for maybe 45 minutes last night, it is absolutely incredible and I cannot believe Returnal didnt take any lessons from it. It's shocking playing this and making progress after every run. I couldnt even enjoy it because I was so pissed at Returnal.
Reactions: Heimdall_Xtreme, alabtrosMyster, NeoIkaruGAF and 7 others

No wonder, the game is literally perfect.
Reactions: jaysius, Shubh_C63, HerjansEagleFeeder and 3 others

Yes, you are the only one.
Reactions: Hoppa, thief183, Cynical_Aries and 11 others

It's the best roguelike on the market.
Reactions: jaysius, ZywyPL, DarkMage619 and 1 other person

Center of the World

finally, more people get to play this masterpiece
Reactions: Bluecondor, Plantoid and BPX

I'm curious, what is everyone's opinion of what makes this game stand out so much? I'm still playing Ascent but debating playing Hades next. Is it some huge change of gameplay that has not been done before ? Incredible story ?

An incredible game, one of the best this gen so far for sure. Some people wont see it because its not throwing around tens of millions of polygons but thats their loss.
Reactions: IKSTUGA and Bluecondor

Don't like it but cool review scores.
Reactions: waquzy and Anki

It’s pretty decent, but I agree that it is over-hyped. I enjoy it in small bursts, but it is a bit of a button masher at times. The redeeming quality is the way the character interactions build over time.
Reactions: CatLady
D

Genuine game of a generation. More or less delivers perfection on what they set out to do. It’s really that good.
Reactions: Bluecondor, Vognerful, PayoLoko and 1 other person
M

Borderlands 3 isn't a bad game, but it's not that good either.
Reactions: Cynical_Aries, Kerkermeister, M1chl and 5 others

Great game. Love it on my switch!

I agree, but I don't like roguelites.
Reactions: CatLady

Highest rated game OF ALL TIMES!

OF
ALL
TIMES!
Reactions: N1tr0sOx1d3, mortal, dotnotbot and 5 others

j0hnnix said:
I'm curious, what is everyone's opinion of what makes this game stand out so much? I'm still playing Ascent but debating playing Hades next. Is it some huge change of gameplay that has not been done before ? Incredible story ?
Click to expand...

One thing I feel like Hades absolutely nailed was it's ability to weave a narrative into a roguelike game. Almost every other roguelike game I've played falls REALLY flat in this area.

Instead of dying and being like "shoot, now I have to start over again from the beginning, but maybe next time I'll do better...", Hades gives you a strong "I died but it's almost like the game expected me to and that's just pushing the story along further" along with "this time when I go back to base, maybe I'll run into a new side character or there will be some interesting plot development" that personally just hooks me to my core. This is all brought together beautify by an amazing cast of voice actors and singing talent.

It also helps that the gameplay itself has incredibly tight and precise controls, along with a good variety of weapons and an almost infinite combination or powerups that all build off of each other in a grand way.
Last edited: Aug 19, 2021
Reactions: Fuz, Cynical_Aries, Bluecondor and 5 others

Been playing since its release on gamepass.

Amazing art style, love the sound and voice acting, and the gameplay is fun. I've played for 4 hours now but besides those strong points the game is also getting a bit boring. Having to go through those same levels the whole time

Actually I have similar opinion. I mean maybe not overhyped, because I can understand it’s appeal but I was quite disappointed?

Great overall presentation, music and superb voice acting but story was not engaging for me at all, After my cleared 5th escape I could not force myself anymore.
Gameplay wise is quite… basic and lack of variety reveals itself quite fast and yes, I have tried heats with amended boss fights.

Really good game which I enjoyed, but IMO definitely not the best rogue lite ever.(played fuckload of them)
Last edited: Aug 19, 2021
Reactions: jaysius and BPX

Every time I see this gif I have to rewatch John Woo's Chow Yun-fat HK Blood Opera saga in the form of A Better Tomorrow 1 & 2, The Killer and Hard Boiled. I can't wait for Bullet in the Head to come out in 4K soon, never seen that one.
Reactions: Javthusiast and BPX

Thanks OP. I just found out wth Ender Lilies is

don't know about Hades specifically yet, but i have similar opinions for a lot of high rated games too.
Last edited: Aug 19, 2021
Reactions: SuperColourful, Athreous and BPX

I saw a trailer for ender Lillie's a while back and forgot about it, cool to see it's a well received game, maybe I should buy it and play it for myself (when I'm done with Hades, trying to get epilogue with no idea if I'm progressing towards it or not)
Reactions: BPX

With all due respect to Hades, but playing/praising a game based on metacritic is nonsense.
Reactions: jaysius and PayoLoko

I personally don't see the appeal. But I also did not cared for bastion.
I prefer enter the gungeon or Isaac.
Is it like that?

Bernd Lauert said:
It's the best roguelike on the market.
Click to expand...

Hell no, it's an entry level roguelike that lacks depth and variety. Same bosses over and over with little replayability. Good game till it gets old.

Enter the Gungeon and Dead Cells are the tops of the genre.
Reactions: PayoLoko

Good game but the overhype kills it, since you play with very high expectations.

IMO Its the best of its genre. Not my cup of tea, though I enjoy playing it a bit from time to time.
E

rofif said:
I personally don't see the appeal. But I also did not cared for bastion.
I prefer enter the gungeon or Isaac.
Is it like that?
Click to expand...

yes, but less projectile based. still plenty of interesting combinations and meta growth though

Literally the first thing i saw and was like, WTF? With the millions of great games released thats a top 3 for PS, holy sht. AND then I saw TH 1-2, LMFAO.

Relax, it's not even been a year.
Reactions: jaysius, Kokoloko85, Banjo64 and 1 other person

Borderlands 3 isn't a bad game, but it's not that good either.

But have you seen that it's on playstation? It makes it at least 0,5 better

Hades is the game i tell roguelike haters to play.

it is the friendliest roguelike game ever made.
nothing you do in this game get wasted imo.

if they don’t even like hades. Then i am sure they really dislike the genre.
Also..

What a joy to play and watch. The art style is breathtaking.
Reactions: Spukc, kuncol02 and Bluecondor

It's so good I'm not dropping it despite the heavy handed homosexual/trans pandering.
Reactions: Batiman

Been freebasing this game ever since it hit gamepass less than a week ago and its easily in my top ten games ever played. Super Giant is an amazing developer and I can't wait for what they do next.
Reactions: Spukc

Demon's Souls, Ori 2, Returnal are all better than Hades. Indies are rated on a different scale than AAA games.

Hades was a good game though. I beat it at launch on the Switch.
Reactions: SpongebobSquaredance, James Sawyer Ford, Mr Moose and 5 others

Not a fan but I love GregK so good on him.
Reactions: Hugare and DenchDeckard
You must log in or register to reply here.