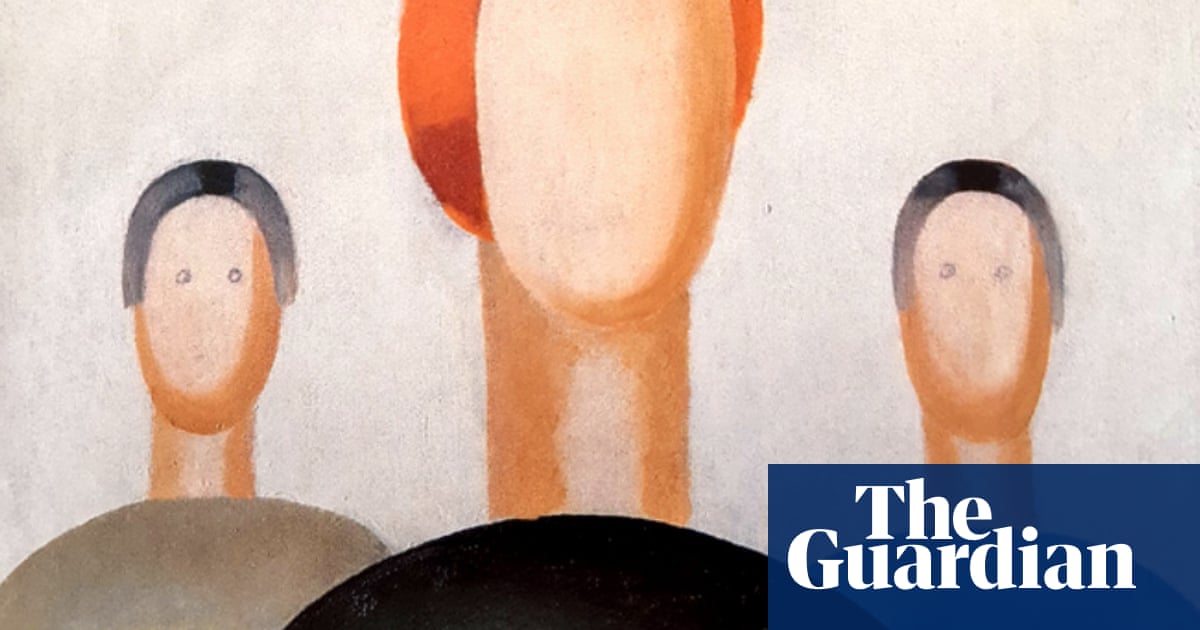 A valuable avant garde painting has been vandalised by a “bored” security guard who drew eyes on faceless figures in the artwork on his first day working in a Russian gallery.

Anna Leporskaya’s Three Figures was painted between 1932 and 1934, and had been insured for 75m roubles (A$1.3m, £740,000). It was on display as part of an abstract art exhibition at the Boris Yeltsin Presidential Center in Ekaterinburg when the guard drew eyes on it using a ballpoint pen.

Alexander Drozdov, the executive director of the Yeltsin Center, did not identify the security guard in a statement, but said he worked for a private security company and had been fired.

The exhibition’s curator, Anna Reshetkina, said the painting was vandalised “with a Yeltsin Center-branded pen”.

“His motives are still unknown but the administration believes it was some kind of a lapse in sanity,” she said.

“The ink has slightly penetrated into the paint layer, since the titanium white used to paint the faces is not covered with author’s varnish, as is often the case in abstract painting of that time,” Ivan Petrov wrote in the Art Newspaper, which broke the story.

“Fortunately, the vandal drew with a pen without strong pressure, and therefore the relief of the strokes as a whole was not disturbed. The left figure also had a small crumble of the paint layer up to the underlying layer on the face.”

The vandalism was first noticed on 7 December by two visitors who raised the alarm with a gallery employee. The painting was removed from the exhibition and returned to the State Tretyakov Gallery in Moscow, which had loaned the painting.

Restoration experts at the Tretyakov have estimated that the restoration work would cost 250,000 roubles (A$4,600).

The Yeltsin Center reported the damage to police on 20 December, but Ekaterinburg’s ministry of internal affairs initially declined to press charges as the damage was deemed “insignificant”. Russian media reported that the ministry of culture later complained to the prosecutor general’s office about the lack of action, and last week police announced that they had opened an investigation. The suspect faces a fine and up to three months in prison.

The Yeltsin Center has since installed protective screens over the remaining works in the exhibition.

This is not the first time a painting has been vandalised in Russia: in 2019 a man was sentenced to two and half years in prison after attacking a painting of Ivan the Terrible in the Tretyakov, tearing it with a pole from the barrier protecting the work. The same work was also attacked in 1913 by a mentally ill man who slashed it with a knife three times.

In 2021, this support sustained investigative work into offshore wealth, spyware, the 6 January insurrection, the corporate actors behind the climate crisis, and the abuses of Big Tech.

The new year, like all new years, will hopefully herald a fresh sense of cautious optimism, and there is certainly much for us to focus on in 2022 - the US midterms, the ongoing fight for racial justice, the next round in the struggle against the pandemic and a World Cup.

With no shareholders or billionaire owner, we can set our own agenda and provide trustworthy journalism that’s free from commercial and political influence, offering a counterweight to the spread of misinformation. When it’s never mattered more, we can investigate and challenge without fear or favour.

Unlike many other media organisations, Guardian journalism is available for everyone to read, regardless of what they can afford to pay. We do this because we believe in information equality. Greater numbers of people can keep track of global events, understand their impact on people and communities, and become inspired to take meaningful action.
Click to expand... 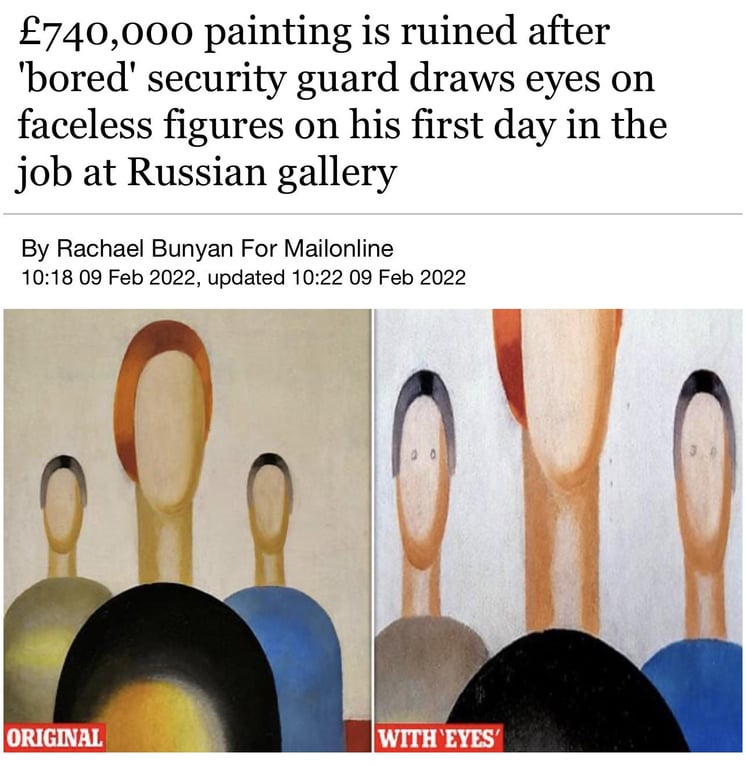 Did he enhance or depreciate? That is the question.

Oh fuck, call in the Hunters, we know who this “guard” truly is!

“We are thinking on the basest of planes. What we need…are more eyes.” - Master Willem (Bloodborne)

Shit’s about to get real!

Found a picture of the guard

AlteredForms said:
Did he enhance or depreciate? That is the question.
Click to expand...

Savage, but true. Painting is shit.

Russia is so motivated to stay in the news headlines now a museum security guard vandalizing art work?!

I'm surprised more stuff isn't vandalized and broken in art galleries and museums. Considering how many idiots there are in the world, you'd think all art would be put behind glass for precaution. I would.

This is occult art. Unsurprising to read “His motives are still unknown but the administration believes it was some kind of a lapse in sanity,” she said.
Last edited: Feb 10, 2022

That Guard is going to be 'bored' in jail

First day on the job.

That guy has astronomical career aspirations.

chromhound said:
That Guard is going to be 'bored' in jail
Click to expand...

Nah, other prisoners are gonna draw eyes over his asshole to simulate a face with an open mouth.
Last edited: Feb 10, 2022

That guy has astronomical career aspirations.
Click to expand...

StreetsofBeige said:
I'm surprised more stuff isn't vandalized and broken in art galleries and museums. Considering how many idiots there are in the world, you'd think all art would be put behind glass for precaution. I would.
Click to expand...

Reminds me of this from a few years ago: 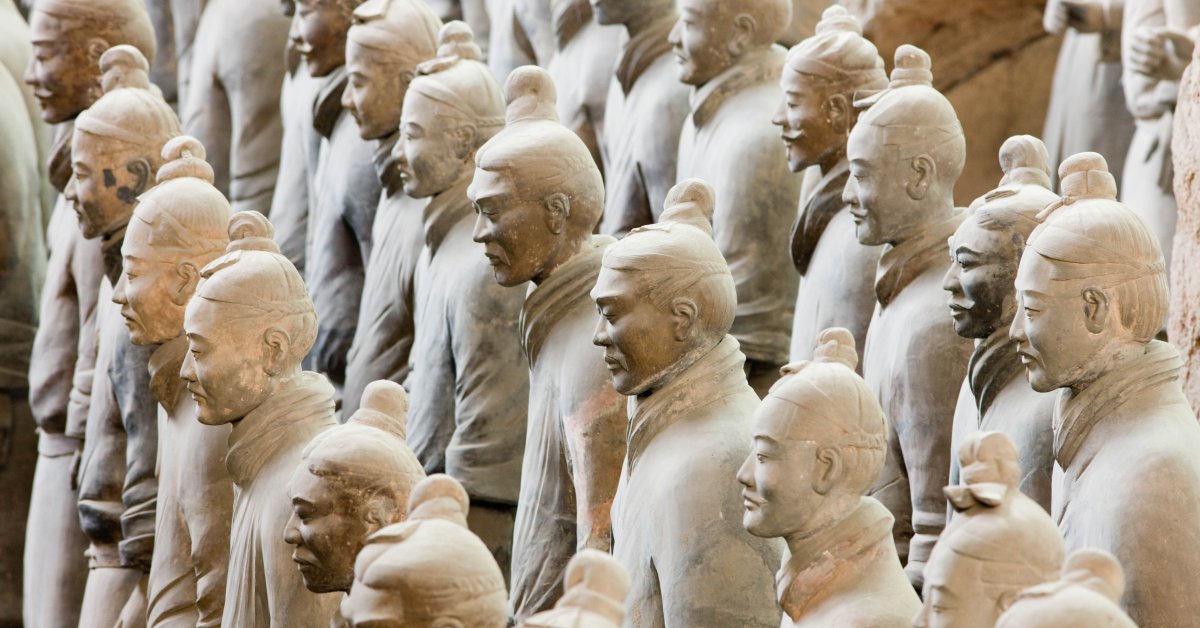 Outrage After U.S. Man Stole a Finger From a Chinese Statue

The terra-cotta warriors are among China's national treasures

Should have stuck those little bubbly googley eyes on it instead.

That guard should start drawing on large canvases. He has a story to tell and people want to see it.

Raistandantulus said:
This is occult art.
Click to expand...

"It's not vandalism, it's a provocation, it's the observer who is truly part of the opera, the art beyond its creator" or other stupid shit to explain the modern art.

Highly doubt it's ruined. Pretty sure a good conservator can remove that.

It would hardly be occult if it was all explained to you, would it.

How is water wet?

Somebody sell its nft.


"Fine art" is just a money laundering scam. You can't convince me otherwise.

We all know who it was.

Don't forget the tax evasion , the duopoly, the captured market, the stolen art, and so much, so much more.

it was his first day and he was bored.

It's only modern art, false alarm everyone.

GIFs (unlike Facebook and TikTok) are true gifts to humanity.

Joke's on them. He's actually doing performance art by ruining other art.
You must log in or register to reply here.

IbizaPocholo replied
Feb 28, 2019
Sexually Assaulted Women Being Forced Out Of The Military & Labeled As "Mentally Ill"

SnakeswithLasers replied
May 22, 2013
Deus Ex: Human Revolution |OT2| I never asked for this... It gave me lemon-lime