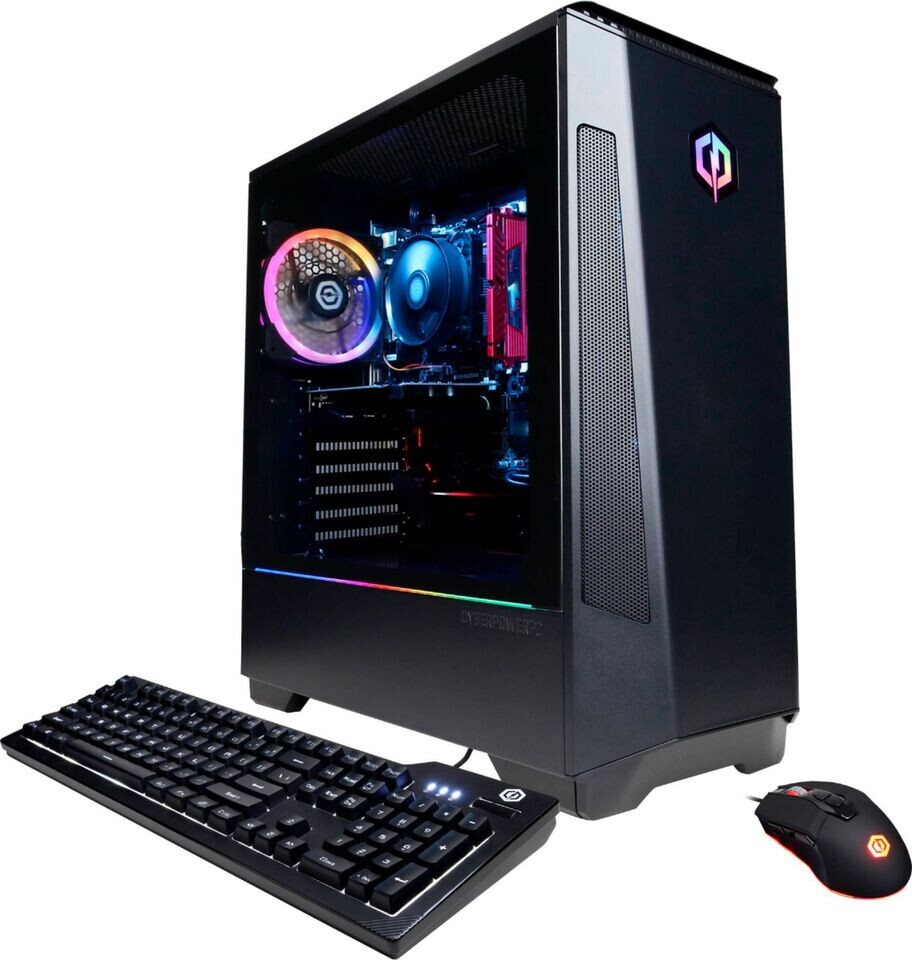 The discrete GPU market has been a duopoly for quite some time, and when Intel announced that the company is rebooting plans for its discrete GPU lineup, another player was about to break that duopoly. Today, that has been changed forever and Intel has officially become the third manufacturer of discrete GPUs, as we can see on the online listing. On BestBuy, CyberPowerPC has listed "Gamer Xtreme Gaming Desktop" powered exclusively by Intel components. When it comes to the CPU choice, Intel's 6C/12T Core i5-11400F CPU model is present without iGPU. Now comes the interesting part. The GPU powering the system is Intel Iris Xe discrete graphics card, which is a DG1 GPU based on Xe-LP SKU.

This model features 80 EUs, resulting in 640 shading units. While this is not any gaming beast, casual 1080p gaming should be just fine on this configuration. The system is listed for 750 US Dollars, and it is sold out, as of the time of writing this. While the performance of this configuration may not be something monumental, it is an important step towards Intel's inclusion in the discrete GPU market. By using OEMs, the GPU will reach a very large market without any major problems. We are waiting to see the first reviews of the system, which will surely take a good look at the card and examine its performance.

“Gamer Xtreme” wtf is it the year 2000 or something?
Reactions: Rentahamster, struggler_guts, FStubbs and 2 others

i bought a cyberpower from bestbuy about 5 years ago for parts becaus eit was super cheep and i swear it had that same case.

Those specs would be pretty Xtreme back then.
Reactions: GreenAlien and DonJuanSchlong

Those grafix are XxTreamxX
Reactions: DonJuanSchlong

I can't wait to do some gamer xtreme gaming desktop gaming. Now with 20% more gaming.

But does it run Crysis?

Diddy X said:
But does it run Crysis?
Click to expand...

Crysis? Crysis won't be released for another 7 years.


Reactions: Darius87, Kuranghi and Ceadeus
A

How many teraflops is this thing?

FStubbs said:
How many teraflops is this thing?
Click to expand...

Where Intel is headed, they won't need teraflops. Xtremeflops is the name of the game.
Reactions: ZywyPL, FromDuskTillGameOver, Darius87 and 1 other person

Powered by Intel? The correct branding should be "ex-Treme"
U

Kuranghi said:
The irony is this boy has a haircut from the 80s/90s lol, your haircut is a piece of junk ya wee bampot.
Click to expand...

Got to be staged. Even if they hadn't seen a gameboy, they've seen a D-pad and buttons.
Reactions: Kuranghi

Surprised it doesn’t have any dragons emblazoned on the side. Wonder if the GPU has a blower with a big titty CGI warrior woman on the shroud.

casual 1080p gaming should be just fine on this configuration. The system is listed for 750 US Dollars

Even intel graphics are sold out. The hell is happening.

Where is your God now, PC Gamers?

It would probably be good for an emulation PC.

But jokes aside: IT IS THE FIRST DGPU BY INTEL GUYS, a first step to breaking duopoly.

Even logo of the GPU series looks like it belongs in that era!

Just put it next to a Pentium 4 and your all set.

still remember the i740 .. it wasn't bad but also not good. And the other problem intel + drivers ... that won't last long.

So... any benchmarks out?
A

But jokes aside: IT IS THE FIRST DGPU BY INTEL GUYS, a first step to breaking duopoly.
Click to expand...

And it is the second dGPU. First was i740. But we could debate if this was a GPU at that time it was just called "3d accelerated graphics card" could more or less just filter faster than the cpu.
Last edited: May 20, 2021
Reactions: llien
You must log in or register to reply here.