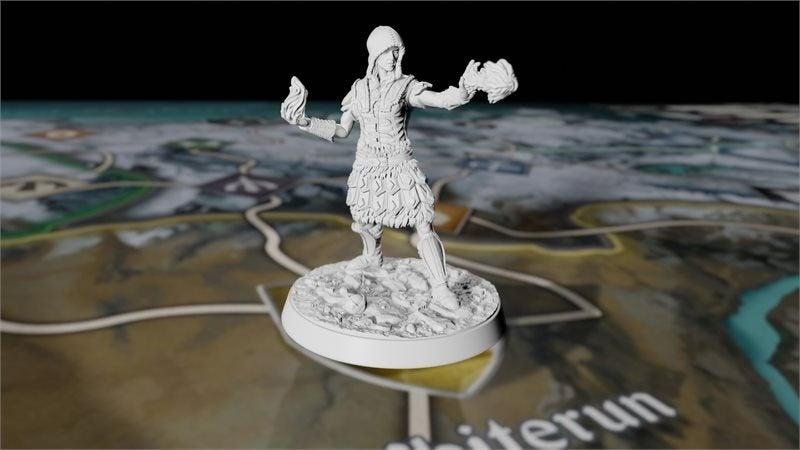 Modiphius Entertainment has revealed a first look at their tabletop adaptation of The Elder [...]

Earlier this month, Modiphius revealed more details about their upcoming The Elder Scrolls V: Skyrim - The Board Game, which they will launch via Gamefound crowdfunding later this year. Not only did Modiphius reveal a first look at some of the game components, they also provided some details about how gameplay will go in this co-op tabletop experience.

Unlike other tabletop adaptations of video games, Modiphius confirmed that their Skyrim board game will feature a brand new story instead of a re-hash of the Dragonborn's tale in the original video game. During the game, players will split their time between defeating their enemies, helping people in need and improving their equipment at various Strongholds.

The new Skyrim board game seems designed as an exploration-based game with Events and Quests driving much of the action. During a single turn, players draw and resolve an Event card, move their characters across Skyrim, and then take a single action. Those actions can range from exploring a dungeon, meeting an interesting NPC, fighting a Roaming Monster, completing a Quest, or exploring an area of the world. Players can also visit a market while at Strongholds and level up if they have enough experience. The game will feature branching narratives and includes "hundreds" of hours of gameplay along with plenty of Easter eggs and nods back to the original video game.

Modiphius announced the Skyrim board game earlier this summer, and stated that it's been in development for several years. The game is based after the incredibly popular The Elder Scrolls V: Skyrim, which is the latest in the high fantasy, open world series created by Bethesda Game Studios. In addition to their Skyrim board game, Modiphius also publishes A Call to Arms, a miniatures skirmish game based on The Elder Scrolls series of games.

No release date or crowdfunding launch date has been announced for Modiphius's Skyrim adaptation, but you can visit their Gamefound page to sign up to receive more notifications about when the game will launch.
D

Ill wait for the 4th or 5th edition

They are laughing at us.

Does it come with cockroaches so you'll never be rid of Skyrim even years after you're done with the game?


Duhhhhh! Of course it does.
They always ship with bugs!
Last edited: Aug 27, 2021
You must log in or register to reply here.