First look at playing Steam PC games on Xbox with M&K, thanks to Edge and the new Xbox Series browser

Microsoft’s new Chromium-based Edge browser is coming to Xbox soon, and the company has now added all-important mouse and keyboard support that will pave the way to stream PC games to Xbox consoles.
Xbox testers in the Alpha Skip-Ahead ring are now able to access this new version of Edge and try out a mouse in the console version of the browser for the first time.
I’ve been testing this new support over the weekend, and I’ve even managed to play some Steam PC games on my Xbox.

Despite a few obvious bugs here and there — as this is very much an early beta browser — it works as expected.
I’ve been able to write documents using Word online, type messages into Discord chats, and even play some Krunker or Quake JS through the browser with a mouse and keyboard.
Basic mouse navigation, scrolling, and right-click all work here just fine.

Where things really get interesting is when you consider what this will mean for the future of streaming games to an Xbox through a browser.
Currently, I can stream Google Stadia games and use mouse and keyboard on the Xbox, but I’ve also been able to successfully stream PC games from Steam to an Xbox through the browser.

I’ve played Counter-Strike: Global Offensive, Death Stranding, DOTA 2, and a bunch of other PC games that simply aren’t available on Xbox right now.
I’ve been able to do this using Parsec, which is essentially a remote desktop app that lets you stream what’s on your PC to a browser. It’s not the most ideal experience on the Xbox right now, as the virtual keyboard appears when you click, and latency / connectivity isn’t always the best, but it’s a good example of what’s possible with this new mouse and keyboard support.
Microsoft’s head of Xbox, Phil Spencer, has already recently committed to bringing full PC games to the Xbox through the company’s Xbox Cloud Gaming (xCloud) service. 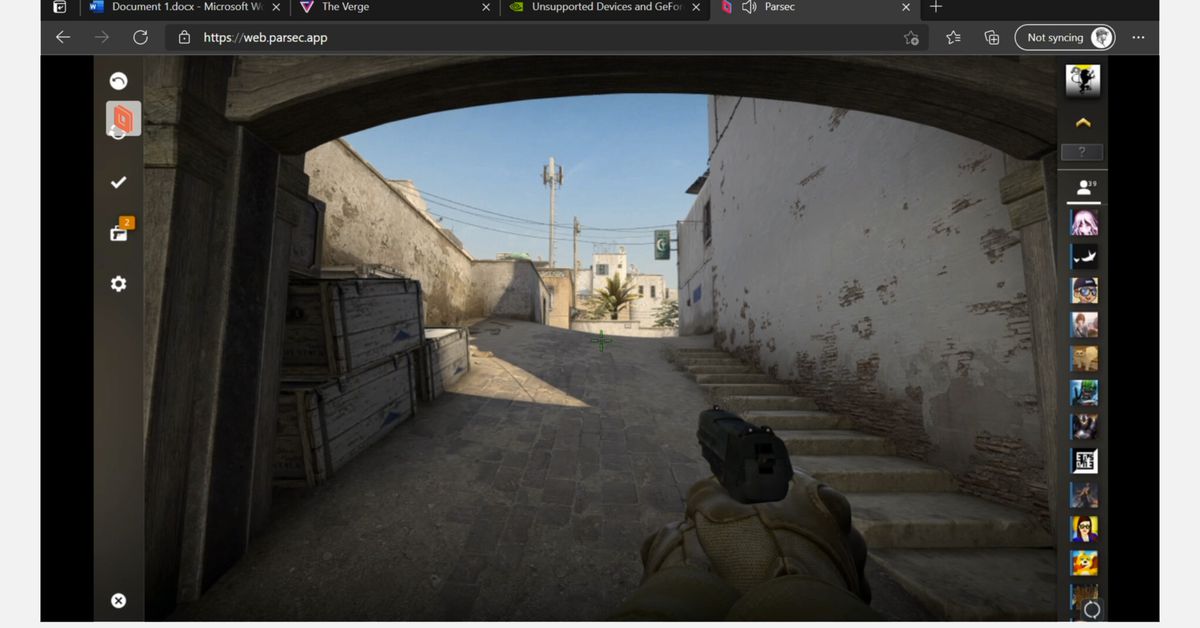 PC games on Xbox could soon be a reality, thanks to streaming.

So the xbox will have the full fledged windows 10 version of chrome edge with mouse and keyboard support?

I always though that they should just let us boot Win10 on the xbox and use it as a PC anyway..

or perhaps they should just have an xbox branded gaming PC
Last edited: Apr 28, 2021

Great. The closer I can integrate my Xbox SX with my PC, the happier I am.

I wonder how Office 365 runs on it. If it ends up with reasonable performance, couldn't that conceivably mean that Xboxes could be used as office machines?

365 should run just fine.. that CPU in there is more than enough to run that. In fact, I guess any cloud based productivity software should run quite alright on the X and S

They should just unlock it all and let you install .exe files.

well everything is possible with cloud, but lol streaming no thanks.

Only thing left is proper ad block for that chrome and Im set.

KyoShiRo330 said:
I’ve been able to do this using Parsec, which is essentially a remote desktop app that lets you stream what’s on your PC to a browser.
Click to expand...

But a native Steam app on Xbox would be very welcome.

Why don't you just stream via the steam app?. Unless you do not have a TV that's supported by the app.

Arcadia88 said:
Only thing left is proper ad block for that chrome and Im set.
Click to expand...

I don't see a reason why they wouldn't allow extensions. Edge on win10 is really good with uBlock on

So I can stream my Shadow PC through Parsec to my Series X.


Wait wait wait. I can emulate a switch through Shadow through Parsec on my Series X

If you've already got a PC that can run these games, why wouldn't you just play them there?
You must log in or register to reply here.