More Thief and Deus Ex would be amazing.

Punished Miku said:
I don't understand the logic of buying studios making unprofitable games and then putting money into sequels of the same thing. Is their strategy to make cheaper sequels? Is their strategy to just somehow magically sell many more copies than when SQEX published it?

They just seem to have zero concern for financial risk on projects, and that's on top of all their acquisitions. Nothing about it really makes sense. Are they going to make games in the same IP, but with a new approach that is somehow better?
Click to expand...

Gamepass could be an option right? We know Microsoft pay good money for Day 1 releases, that would certainly help offset development costs.

00_Zer0 said:
I would like the first 3 remastered as well, but the legends trilogy would be great to remaster too due to all the bugs in those games thanks to Nixxes.
Click to expand...

Nixxes has always been praised for improving on Crystal Dynamics work with their ports.
Last edited: May 20, 2022

Soapbox Killer said:
Tomb Raider Trilogy was every bit of great. Not sure where they go from here but the foundation of those games are solid
Click to expand...

The last one was a bit shit imo. In fact they got gradually worse.

This is why they went from the Legend trilogy. Because it wasnt selling. It went down with each game. 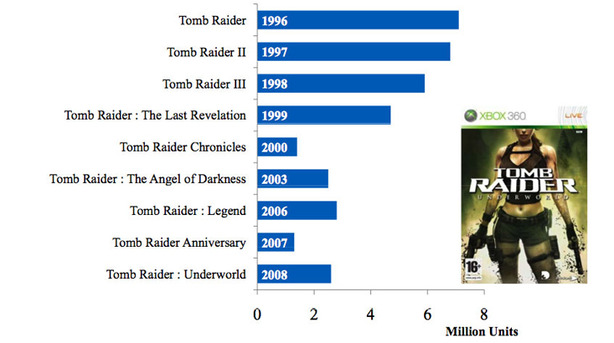 Everyone sees great potential in these studios except Squeenix! Thank God they are moving out!

Verchod said:
More Thief and Deus Ex would be amazing.
Click to expand...

I wouldn’t mind them trying at an Anachronox remake of sequel too. Eidos Montreal was working on a « western made » Final Fantasy before the new SE CEO got elected and then cancelled the whole thing… while they were in development hell with FFversus XIII.

It would be good fun for them to have a go at showing SE they can make something better than them under a new franchise.

The legend trilogy is playable on series x. I’d rather a remake/remaster of the originals.
Last edited: May 20, 2022

Hezekiah said:
The last one was a bit shit imo. In fact they got gradually worse.
Click to expand...

Rise was a improvement over 2013's Tomb Raider like every way. Shadow was the best in terms of platforming and Tombs + puzzles!
F

They could earn some instant good will by patching Mankind divided for 4k/60 on console. I loved that game it was just unfinished as hell.

ShaikhCroft said:
Rise was a improvement over 2013's Tomb Raider like every way. Shadow was the best in terms of platforming and Tombs + puzzles!
Click to expand...

Feel Like I'm On 42 said:
It baffles me though how they made the actual combat worse with each game
Click to expand...

How is Rise's combat worse than 2013? Reboot also had less shootouts!

ShaikhCroft said:
Rise was a improvement over 2013's Tomb Raider like every way. Shadow was the best in terms of platforming and Tombs + puzzles!
Click to expand...

And what about action? Nowhere near enough, 2013 was much better in that regard.

And the shite story obviously.

DukeNukem00 said:
This is why they went from the Legend trilogy. Because it wasnt selling. It went down with each game.

To be fair Tomb Raider Anniversary release after the PS3 launched and was only available on PS2
They also didn't release the 360 version of Legend on PS3 either.
It wasn't until Nixxes ported Underworld that PS3 had its first Tomb Raider and it showed in sales with only 34% being on 360
Despite that CD announced 2 expansions Lara's Shadow & Beneath the Ashes that was exclusive and remains exclusive to Xbox as to this day
Which wasn't even included with the HD Trilogy either
So only Xbox 360 had the whole Trilogy until the HD Trilogy was released on PS3 years later which sold very well. despite TRL HD not even being the 360 Nextgen version and was just the PS2 version in HD
And Underworld still missing the 2 expansions.
But nothing has changed Crystal DynamiXs still snubs the fanbase now, Nixxes handled both Tomb Raider 2013 + Definitive Edition, and Rise of the Tomb Raider after the exclusivity ended.
another wise choice by Crystal DynamiXs
You must log in or register to reply here.

TrueLegend replied
Aug 27, 2022
Square Enix has demanded the removal of alleged details on the next Tomb Raider "Jawbreaker" that were published last week
News Rumor 2

Wildebeest replied
May 5, 2022
A week after selling its Western studios, Square Enix says it will establish or buy new ones (VGC)
Opinion News