Embark on a lesbian road trip and beat up cultists in Get In The Car, Loser! 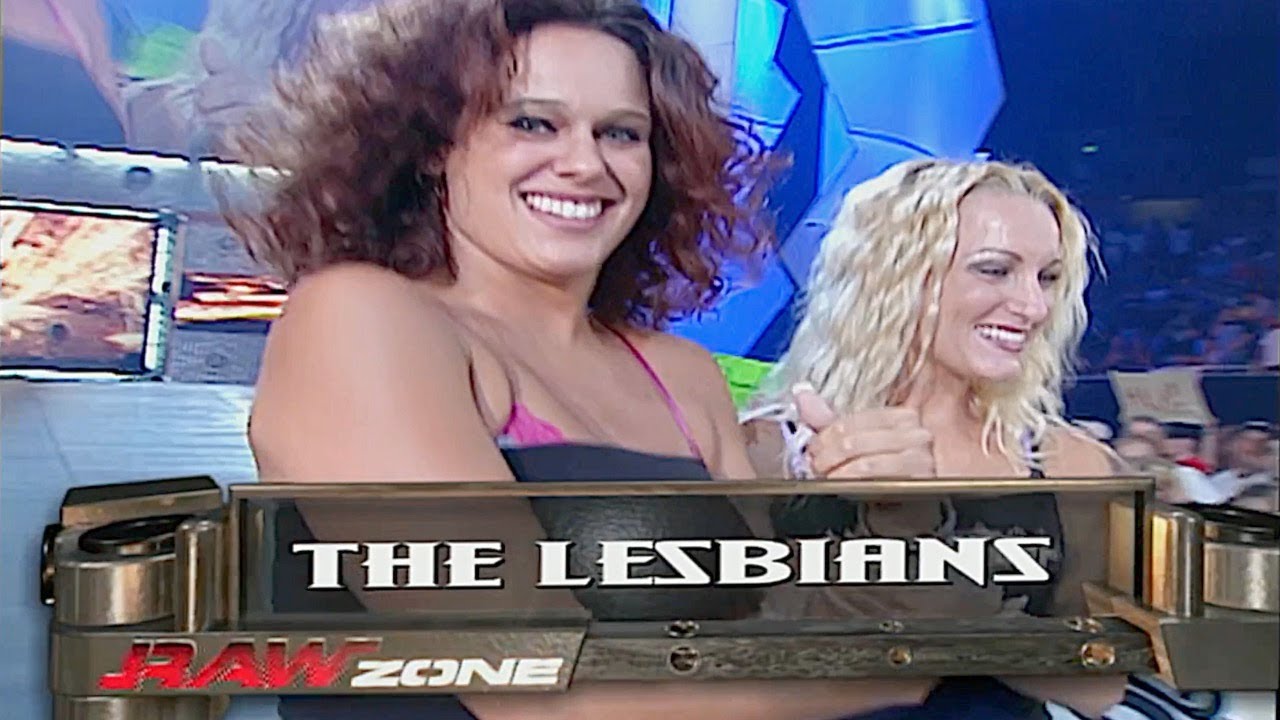 Embark on a lesbian road trip and beat up cultists in Get In The Car, Loser!​ 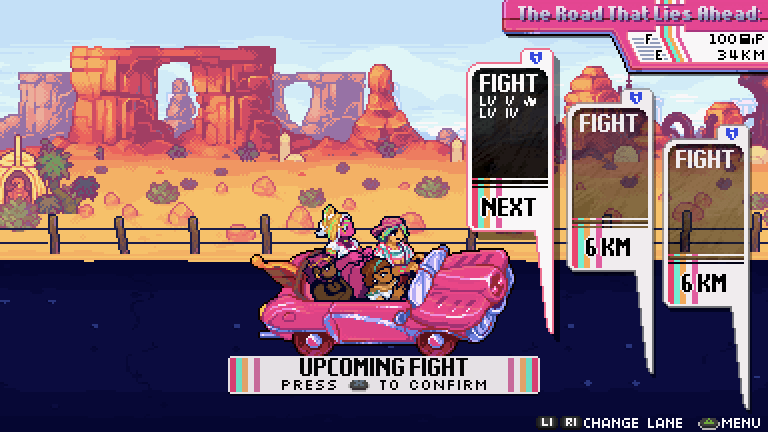 In games, grandiose but urgent expeditions to save the world these days are curiously bloated with millions of side quests. A city could be in dire peril, but certain destruction could probably wait until you travel 50,000 miles towards another city to pick up some groceries. Or the galaxy could be annihilated by behemoth aliens at any moment, but you still need to head out to another planet to look for someone’s missing pet.

Get In The Car, Loser!, an RPG featuring a bunch of rad lesbian warriors on an important road trip to defeat a evil cult, understands the ridiculousness of these scenarios, plainly stating that the game will not feature any side quests, maps or codex entries; just straight to the point hacking and slashing ugly monsters with three of your best lesbian friends. A modern RPG by Christine Love, who’s also known for being one of the developers behind the acclaimed visual novel Ladykiller In A Bind, Get In The Car, Loser! features the turn-based combat system that’s a staple of many JRPGs today, with its cast of characters taking up complimentary roles—including a tank who would absorb the party’s heaviest damage, and a healer who could restore the party’s health in a pinch.

What’s even more notable about the game too, is a diverse cast that’s not usually seen in games, from a non-binary boyfriend to people of colour finally getting the representation they deserve. The game is purportedly more than just about busting the asses of evil cultists, too; it’s also about a tale of self-discovery, with discussions of gender anxieties, self-image and thorny topics such as transphobia and racism being tackled. Rather than a gloomy outlook, however, the game still manages to look effusively stylish and upbeat, which is exactly what all of us fellow queers need.

Get In The Car, Loser! will see a release in September this year.

She said "GET IN THE CAR, LOSER! I know you're not up to anything this summer, I've got the Sword of Fate, and there's an ancient evil that needs to be sealed away."

Everyone knows the story of how the great hero of legend Agi of Roses fought the Machine Devil and used the Sword of Fate to seal him away for a thousand years. Now, hateful Machine Devil cultist edgelords are spreading terror in order to summon him again, and the Divine Order that rules over our world claims that fighting them before it's too late would be "just as bad as them."

Obviously that won't stand, and that's why three young attendees of the local Academy of Order and one renegade angel from the Divine Order are heading off on a road trip to take the fight to the Machine Devil and his cultists. Will you succeed in your mission to save the world for another thousand years and hit every diner along the road on the way, or will you just be a useless gay disaster?

A lesbian road trip RPG by the co-creator of Ladykiller in a Bind about fighting for love and justice in the face of indifference, and "discovering yourself" as a useless gay disaster.

Get in the Car, Loser! is first and foremost a fun adventure story about self-discovery and triumphing over evil in the face of cosmic indifference. But it's also about fighting a reactionary death cult that's sexist, homophobic, racist, transphobic, including domestic abusers and murderers. Sam will have to face evil on her journey, but she will also have to confront her own internal gender anxieties and self-image doubt. There's nothing wrong with stepping back from a fight until you're emotionally prepared for it.

Watch, they'll find ways this is offensive and how it mocks them and is homophobic and sexists at same time
Last edited: Aug 26, 2021

Meh, why not, better to do it's own game...for this type of thing.

I can't even make fun of it. It's a literal parody of itself.

Cringe through the roof.

I like how they put a lot of pink in it for the girls.
N

Is being a lesbian that important for the context of the game for it to be highlighted?Like the game said, its all about the next fight you're getting into.

Couldn't they have been friends or acquainteces?Or better yet, the game doesn't mention anything of the sorts because its not relevant to the game.Was that ever an option?

Man these woke people will kill the videogame industry soon
They did the same with the comic industry
Last edited: Aug 26, 2021

Bernd Lauert said:
I can't even make fun of it. It's a literal parody of itself.
Click to expand...

They definitely need a stamina gauge.

That battle theme song is so bad

Nautilus said:
Is being a lesbian that important for the context of the game for it to be highlighted?
Click to expand...

Would I or anybody else have posted about this game if lesbians weren't involved?

So it's basically FFXV?
N

Bullet Club said:
Would I or anybody else have posted about this game if lesbians weren't involved?

Who the fuck thought this was a good game idea
J

What a dull game, I fully understand why they made the stupid gimmick, nobody would pay attention otherwise.

this looks like a simple game with a fun style and aesthetic.

there are plenty of games that mask pretty standard gameplay with interesting narrative concepts or stories.
don't act like you're being critical of the game design when you're really just triggered by pixelated lesbians.

I hope it reaches the crowd it's after. There's no problem at all with games like this, and I'm happy that the LGBT+ community is making its own games.

I prefer Road Trip the movie (don’t Google it).

Good for them I guess.
I'd rather have these woke people make their own games than fill regular games with this shit.

Elder Legend said:
Watch, they'll find ways this is offensive and how it mocks them and is homophobic and sexists at same time
Click to expand...

That game "Boyfriend Dungeon" , which was another one of these "made for people with blue hair and pronouns on their twitter profile", got a ton of hate shortly after releasing because even though it featured a trigger warning, people felt it wasn't extensive or specific enough.

saiws said:
don't act like you're being critical of the game design when you're really just triggered by pixelated lesbians.
Click to expand...

I couldn't give a shit about games with this sort of narrative existing, if there's a market that wants to buy it, that's fine. My issue is that the game's creators can't even keep the gender (or lack thereof) of one of their characters straight.
Last edited: Aug 26, 2021 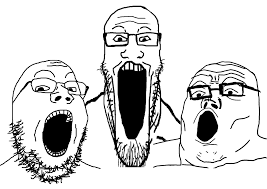 Stunning and brave in current year! I’ll definitely tweet about it! I’m glad that game companies are pandering to my globalist, modern beliefs. Will buy the end product? Of course not because capitalism bad!

Mine is all out with this game

Opened this thread thinking it's about Saints Row reboot.
P

harry mason 1989 said:
Man these woke people will kill the videogame industry soon
The did the same with the comic industry
Click to expand...

Context please. I haven't been following the comic industry in such a long time despite watching a lot of movies and shows based on comics.
Last edited: Aug 26, 2021

shoplifter said:
I couldn't give a shit about games with this sort of narrative existing, if there's a market that wants to buy it, that's fine. My issue is that the game's creators can't even keep the gender (or lack thereof) of one of their characters straight.
Click to expand...

Did you not see that they misgendered their own character?

harry mason 1989 said:
That battle theme song is so bad
Click to expand...

Sad thing is, the game could be actually cool and fun! Well designed, nicely balanced and with fun mechanics and all that.

But man, I'm not playing it with that lesbian virtue signaling coat of paint all over it.

PS: If the music is as bad as some of you say then this game can go double fuck itself.

shoplifter said:
Did you not see that they misgendered their own character?
Click to expand...

right. i'm sure that's what you're really concerned about.

The game surely understands the ridiculousness of those scenarios, but... well... I mean, that dialogue in the trailer...

saiws said:
right. i'm sure that's what you're really concerned about.
Click to expand...

my only concern is that i find that hilarious, you should probably abstain from attempting to read minds
Last edited: Aug 26, 2021
V

sloppyjoe_gamer said:
I want to know how many Era users are a part of this dev team
Click to expand...

Who the fuck thought this was a good game idea
Click to expand...

A forum with a purple theme.

Looking forward to their next game, ’Transninja’.

Last time I was in a car full of lesbians they gave me drugs, but they hated the taste (who likes the taste of hairspray lol) so it was mixed into an isotonic sports drink with sliced strawberries in it, I've never taken drugs in such fruity oppulence like that before or since!

Are these lesbians as fun and generous as that?

That battle music though aye, sounds like it was recorded at a rundown club on the waterfront and the mic was in the river, inside a fish. A lot of devs don't really get pixel art do they, if you squint your eyes a lot and it doesn't look better/gain more detail then you're doing it wrong imo. Look at proper old pixel art and its like you see a ton more detail when you process the image - either by putting it on a real CRT, a good filter on an LCD at properly multiplied res or in an ultra-pinch the ol' eye squint trick.

Correct me if I'm wrong but I see this pixel crawl bullshit as a sign thats its not been drawn frame by frame and interpolation/some other method was used to help out. Zoom in on it and look at the neckline, raised arm and the bottom of the skirt:

I know its a bit unfair since this stuff is regarded as the best but compare it to good ol' Utan:

Its night and day difference to me, we need a time machine to go back and get the people who made the better MS games (1,2,X,3&5) and give them an unlimited budget to make their magnum opus. Fuck sake Einstein from Red Alert 1 why'd you waste your time killing Hitler when you could've given us Metal Slug: The Greatest Story Ever Told.

Bullet Club said:
Would I or anybody else have posted about this game if lesbians weren't involved?

This is infinitely better than forcing such ideas/characters to straight-dominated IPs. Good for them, if they like that kind of thing.

So are the special attacks the scissor cut and or the strap on beam?

Their fragility is showing

Madjako replied
Oct 23, 2022
The 3DO is a great system with an incredible library of games. A recommendation thread. (Gif img heavy)
2 3