I was reading this article on why it makes sense to eat insects and a lot of the points made are compelling (if true). But even bringing up the question in America is met with revulsion because we see insects as pests to be removed from our homes. And I don't see how that would ever change unless we were forced to as a result of low supply of other protein sources.

I ate a chocolate cricket at a Harvest festival and I thought i was pretty damn cool. Its legs got stuck in my teeth and it felt like I ate sand after I swallowed it. But it just tasted like chocolate so it was pretty lame.

Despite the fact that 80% of the worlds cultures eat insects (thats right: the US is in the minority here) most people in our culture consider insects simply to be pests. But when you consider the logic of bugs as food, from an ecological, financial, and global perspective, they start to seem a lot more palatable.

A United Nations report found that the livestock industry is responsible for generating more greenhouse gas emissions than transport. That means the burgers, chicken, and pork we are eating are technically worse for our environment than our cars. Insects require such fewer resources in terms of food, water, and land space that, as David Gracer of SmallStock Foods puts it, Cows and pigs are the SUVs of the food world. And bugstheyre the Priuses, maybe even bicycles.

9. It is up to 20 times more efficient to raise insect protein than beef. Thats per pound. This is mainly because bugs dont waste food energy on things like raising their body temperature, or making bones, fur, feathers, and other stuff we cant eat.

7. You are probably already doing it, as the FDA allows a certain amount of insect matter to be present in most commercial foods: an average of 150 or more insect fragments are allowed per 100 grams of wheat flour, for instance  thats a lot of bug!

6. Most cultures in the world not only eat insects, but in many cases find them to be a delicacy.

5. If insects themselves were deemed a food crop, imagine how much we could cut down on pesticide use, and its associated environmental damage.

3. Many animal rights activists often wont get up in arms over eating bugs, as they are already exterminated on a daily basis (the bugs, not the activists).

2. Insects may be the food of the future, as scientists are researching their potential as a space food crop.

And the number one reason to eat insects is

1. Insects are a great, inexpensive, green source of the protein desperately needed by starving peoples. If we can help create a market and funding for it, there is the potential to help spread nourishment throughout the planet.
Click to expand...

I encourage you all to eat insects. More burgers, chicken and pork for me.
O

mash em up and sell them in the shape nuggets

I wish there was this option where I live so I can try. Depending on how it's prepared and seasoned, I can find myself eating cooked or fried bugs.
Raw insects....nope, can't do it now. It would take shit lots of mental training for this.
I

I suspect insects will be processed into generic "food-grade paste" just like any other meat today.
M

This is the only way most people would eat them. I'd willingly try one as long as it didn't look like an insect. Unless it was a giant insect shaped out of minced up insect and covered in breadcrumbs.

I like Quorn too - don't know whether that is more efficient to grow than insects, but presumably it is much easier to process.
C

It's a cultural thing and to be fair, as logical as I try to be about it I can't bring myself to even want to try eat an insect. If I was raised to then I most likely wouldn't care as those who eat them do.

It's a hard thing to change, parents who don't eat them would need to raise their children to to make any impacting change, it has to start somewhere and I feel it's in the early stages.
K

This would be the only way, and I'd have to not know they were bugs at first otherwise I would never try them.
P

I can see eating like a cricket as it is kinda like a land shrimp.... but LARVAE ????? no fucking way
L

I only eat invertebrates from the sea.

I think we're at a point where we should force people to eat them. Mix them into fast foods or processed things. Better than cardboard, which is is already in there. At least this shit is literally good for you.
T

Do I win a prize for talking about my penis on the Internet???

I think the crunch and hairy legs getting stuck between your teeth might be a turn off.

I'll stick with steak, thanks.

I love trying new foods, even more so exotic ones, but I'll just never be able to get myself to eat insects.

I think it's a mental barrier you have to break before it has a chance to form.

Some people can surely push themselves to try it, and might even enjoy it enough to keep doing it, but most people probably have to be raised doing it to not have a problem with the idea.

Closest I'll ever be able to get is my love for seafood, since things like shrimp and crabs are already basically the insects and spiders of the sea.
W

Mecklemore Is My Favorite Wrapper

Be the change you want to see in the world, Escape Goat.
S

Insects is commonly proposed as a solution to high impact protein production. Though yes, for cultural reasons it never took off in the West. It would make more sense, I think, to figure out a way to detach the nutrition from the substance, kinda like the way we can create lab-meat. Some people balk at that idea, but these people are typically a lot more well off and not grounded in any real science. I think on the whole most can accept it as a nutrition source if you push it in the right way.
N

I couldn't bring myself to eat insects, the thought of it makes my skin crawl
R

We've been hearing about insects as an untapped food resource for years and years, yet in the west outside of occasionally appearing at food fairs it doesn't seem to be catching on at all.

Anyway, a great way to waste time is to look around youtube for the subject, there are countless documentaries, tv specials, cooking show segments about insects. Most definitely interesting to research.

I think it will eventually come, but probably more out of necessity as food prices continue to go way up and not because there's demand for it. Maybe there will be once people start eating it and develop a taste for it?

I love shrimp and other sea food so obviously you can't pretend like it's not a very similar thing.

I've never knowingly eaten a bug and these don't look appetizing to me: 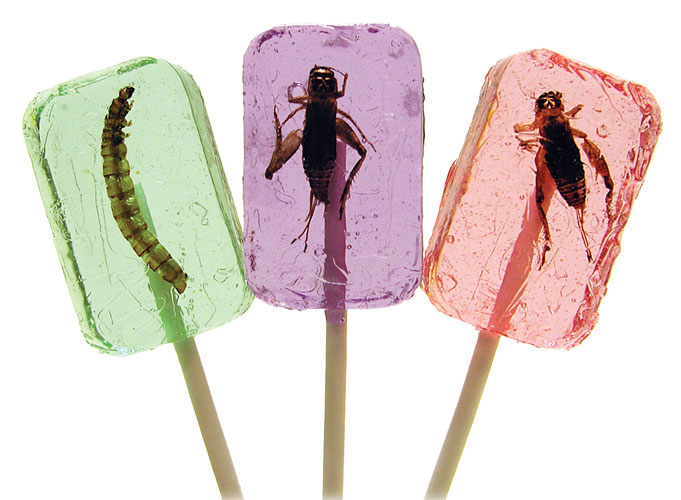 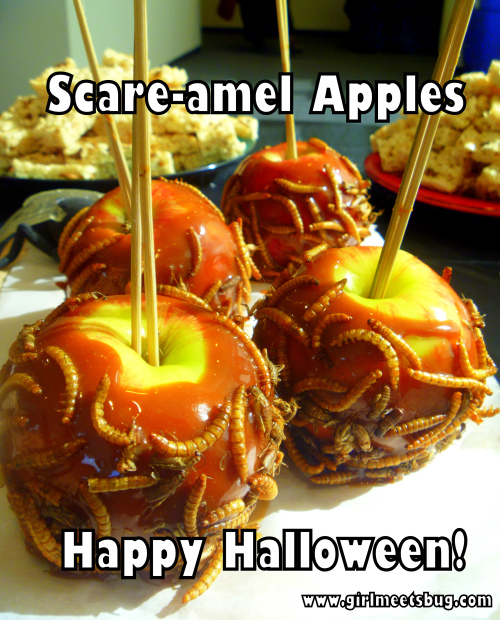 Bee larvae sauteed in butter and a little honey apparently tastes like bacon.

THERE IS NO GOD TO PUNISH THIS
C

No thanks. Can't stand some bugs and eating them is much worse.
C

Ugh, the logic is so sound and reasonable...but I just can't do it man. There's just no way. There are so many elements of culture that I could easily reject due to a logical basis for doing so...but...

Just no...I can't, I wish I could but the idea of it makes me sick to my stomach.

we will be able to press insect meat into different forms like steaks, nuggets, whatever, and it will solve a lot of problems.
I for one welcome our insect eating future.
T

Eating insects for their meat would be a positive step in my opinion. The perfect scenario would be scientists creating a way to manufacture meat without killing an animal.
A

Can we make the poor people eat insects while proper food is made available to me and my important upper-class friends?
H

I'm not gonna dispute the benefits of eating insects, I just can't wrap my head around actually doing it. It's hard to get over that hurdle, you know?
D

I'm all for bringing insect eating to American culture.

The thing with beef is that it is mostly hidden, but insects roam throught the shit in their lives
W

Mecklemore Is My Favorite Wrapper

Arthr2ShdsJcksn said:
Can we make the poor people eat insects while proper food is made available to me and my important upper-class friends?
Click to expand...

Only if you want to see the poors eat their babies

Arthr2ShdsJcksn said:
Can we make the poor people eat insects while proper food is made available to me and my important upper-class friends?
Click to expand...

The only way I could eat them is if they look nothing like insects when they're going in my mouth, and if I can't feel tiny legs and wings when chewing them. Also, no crunch, please.
T

This reminds me of a scene in Snowpiercer. A scene that didn't make me want to eat insects.
E

WanderingWind said:
Only if you want to see the poors eat their babies
Click to expand...

so...baby back ribs aren't made from real babies?

The flight plan I just filed with the agency list me, my men, Dr. Pavel here. But only one of you!

Never had the chance to eat bugs. I think using bugs as food is actually illegal in Italy.
Also apparently chitin is not good for you.
E

there is only one way.

some crickets can get as big as quails.

imagine eating a stack of qual-sized crickets for dinner.

PSY&#12539;S;149499470 said:
The only way I could eat them is if they look nothing like insects when they're going in my mouth, and if I can't feel tiny legs and wings when chewing them. Also, no crunch, please.
Click to expand...

Larvae don't have wings or legs. Though there a bit of crunch when eating the head.

Whenever I buy May cherries I like to pop 'em open and nom the grubs first (May cherries are chock full of fruit wasp larvae). Always good to get some protein with your carbs.
B

I'm in no damn hurry to do it again.
R

You're not supposed to eat them raw. And you're supposed to remove their heads and guts first.
M

I'm comfortable being in the 20 percent of the world that doesn't eat bugs.
A

I like scorpion. It's got this flavor I can't explain, like it'd be good ground up over some rice.

I had meal worm kind of just like bland meal. They are good with a little hot sauce.

Had choco covered ants but not much else. I'd try other bugs.