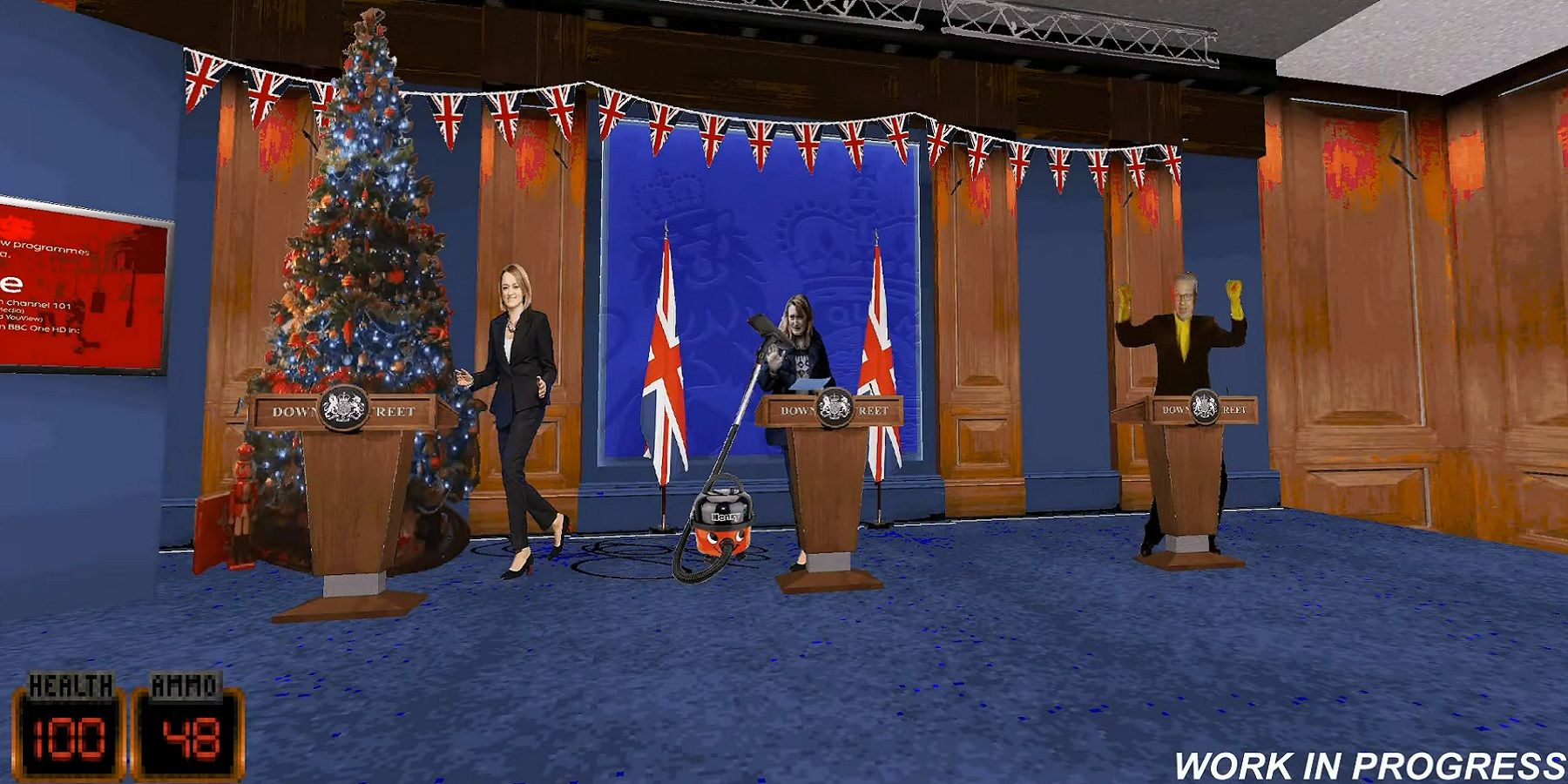 While the series has gone the way of the dodo since the last entry, Duke Nukem 3D is still considered a classic, with mods being made to this day.

In a recent video uploaded to YouTube, Dan Douglas has shown the current work that's been put into "Duke Smoochem 3D," a mod that takes the classic Duke Nukem game and turns it into a shooter with a heavy leaning towards all things British. While the main purpose of the video is to show off the track by D. Lee Jackson, who composed one of the songs for the 1996 FPS, it also demonstrates some footage from the add-on, which encapsulates a lot of the aesthetic and cultural landscape that many readers from the UK will no doubt recognize. The mod itself is being created in the original Build engine that was used to make the main game.

Among other things, there are guns fired in a Sainsbury's supermarket, the shooting up of a Yazoo milkshake truck, which then engulfs controversial politician Nigel Forage in the runny substance, the sight of a Gregg's bakery on the high street, and much more. There's even a sequence that takes place inside the Great British Bake-Off tent, which is a show that became popular even outside of Britain. In general, "Duke Smoochem 3D" attempts to embrace what it means to be from Britain, and although it does so while maintaining the action of the game, much of the theme has an air of amusing satire about it.

At the moment, there doesn't seem to be any release date for the mod, but it looks as though Douglas has been working on it for a few months now

It's sad that Gearbox doesn't give a damn about Duke Nukem's IP.

The only way this could be more British is if he removed the guns and added knives everywhere.

That has made my day. I'd buy this if it went to console.

Needs a cockney voiceover for Duke to make this perfection.

MarkyG said:
Needs a cockney voiceover for Duke to make this perfection.
Click to expand...

We should have Rab C Nesbitt as the voice

He will have to work super hard to beat...

STARSBarry said:
He will have to work super hard to beat...

What is this? Doom for liberals?

Bragr said:
What is this? Doom for liberals?
Click to expand...

Naa doom for anyone who is still able to have a laugh, might not intrest you though.

STARSBarry said:
Naa doom for anyone who is still able to have a laugh, might not intrest you though.
Click to expand...

I'm just saying, there was this weird thing when she died weere a lot of people on twitter were celebrating her death, putting that in context with this mod makes it a bit weird.

Of course a thread about something British has already transformed into discussing what a cunt Thatcher was.

MudoSkills said:
Of course a thread about something British has already transformed into discussing what a cunt Thatcher was.
Click to expand...

It's like having a game about American culture without a school shooting.

Without the imbedded fear that the Church of England could at any time resurrect Thatcher and the inevitable milk snatching crises it would cause, is it a British culture game at all?
Last edited: May 12, 2022
You must log in or register to reply here.