Ubisoft has announced that a new mode is coming to The Division 2, and while the studio isn't quite ready to share all the details, it looks like some information about it has emerged ahead of time.

In a statement posted on social media, Ubisoft said the focus of an upcoming Public Test Server launch on PC will be to test a "new game mode." Pre-loading for the PTS begins March 31 at 7 AM PT / 10 AM ET, with the PTS itself going live on April 1 at 2 AM PT / 5 AM ET. That is April Fools' day, so there is a chance there are some shenanigans going on here, but keep checking back with the GameSpot for the latest. 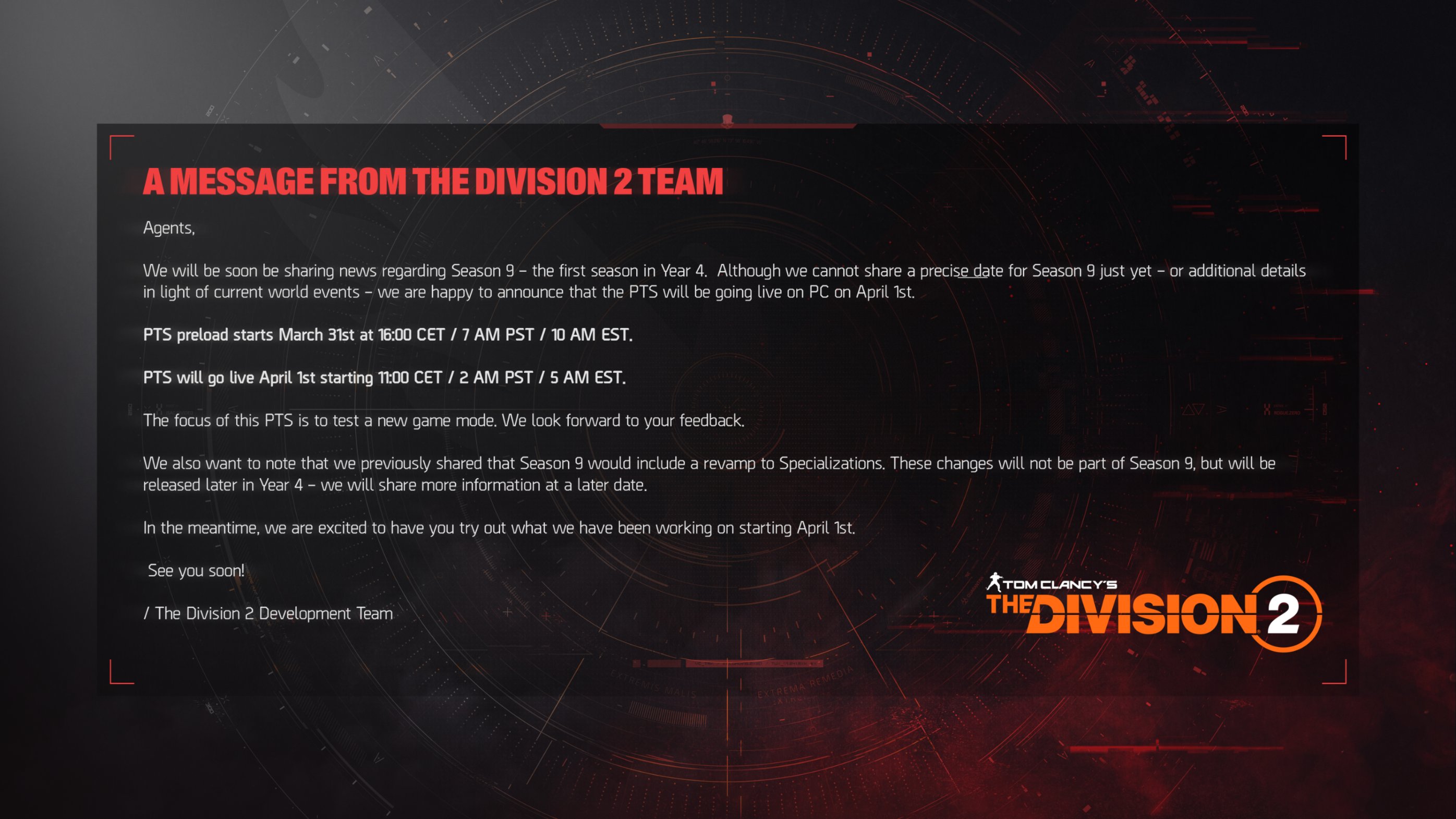 Ubisoft also confirmed that the first season of The Division 2's Year 4, Season 9 remains in the works. However, Ubisoft said it is not announcing a specific release date or any other information "in light of current world events."

Also in the post, Ubisoft clarified that the revamp to Specializations that was previously planned for release in Season 9 are now being delayed to sometime later, but still during Year 4.

"In the meantime, we are excited to have you try out what we have been working on starting April 1st," Ubisoft teased of the new mode.

GrumpierFaceman on Twitter replied to Ubisoft's tweet with video footage claiming to be the new mode, which could be called "Welcome Heartland." It's "very Tarkov meets Vigor," the person said, referencing those two games and their gameplay styles and systems. Players will apparently enter a multiplayer zone with high stakes--all gear is lost when you die, it seems.

How's the game these days?

It was my favourite online third person shooter from last-gen, by a long shot.
C

Could be cool, Played a bit when they did the Xbox SX upgrade but stopped after a few weeks. Hope this mode works out for them and brings players back in.

It was my favourite online third person shooter from last-gen, by a long shot.
Click to expand...

Division 1 was mine, but I could not get into 2 because of the setting. Maybe this will bring me back but PC version for me was always dead, could never find anyone to play with.

Just felt that the loot cycle was too dry at endgame. Wanted more variations in weaponry.

Would be happy to dive back into the game for a bit.

interesting, really enjoyed the survival game mode in the first game hopefully this improves on it.
D

The sort of news that would make some people pee pee out there butthole.

I need to play the dlc for this still, maybe I should get round too it after I finish cyberpunk
C

anthony2690 said:
I need to play the dlc for this still, maybe I should get round too it after I finish cyberpunk
Click to expand...

I was playing it but wasn't able to go back to the original island and got stuck on the DLC island because you need to complete all the main missions before leaving apparently.
T

No cross platform play on this one right? Shame as my brother in law plays it on pc and I’d like to play with him using my ps5
S

Trogdor1123 said:
No cross platform play on this one right? Shame as my brother in law plays it on pc and I’d like to play with him using my ps5
Click to expand...


It was announced that yes, more content for The Division 2 itself was coming, and here in year 4, we now have a look at what exactly that means.

It’s an odd situation, however. Though the new content is live on the PTS right now, The Division 2 is not talking about it openly or promoting it at all really. That’s because of “current events,” namely the war in Ukraine, and now we know why. The new Division 2 game mode is “Countdown,” which has armed forces assaulting/defending a nuclear power plant. I suppose that hits a bit too close to the realities of Russian forces taking over similar power plants in Ukraine as we speak. 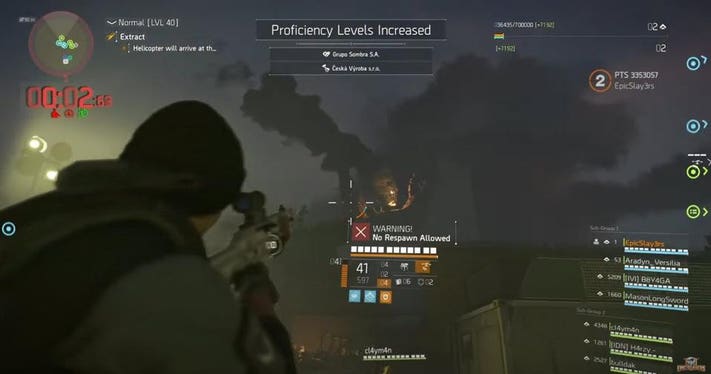 Countdown has you completing a few different objectives like securing locations and fending off enemies, first in two groups, then you eventually merge together as one, and all eight players have to take on a large number of enemies which can include Hunters. You then have to extract to finish the encounter, all the while being on a timer.

I really really REEEALLY want them to make Division 3. I still ache to play Division 1, such a beautiful immersive game. I just couldn't get into Division 2 at all.
A

I think TD2 is a MUCH better game than TD1. And the game is still fun if you just want a looter-shooter.

I want to be optimistic about this, but as Paul Tassi at Forbes describes this, it just looks like a collection of elements from other game modes.

It still doesn't make sense to me that they just walked away from Survival from Division I.

That game mode was so popular and well respected. Honestly, the only problem with it was that they never randomized the loot locations, so hardcore players memorized every drop on the map, which absolutely destroyed the immersion of having to scavenge to find clothing and weapons. Outside of this flaw, the gameplay was compelling because you started off with absolutely nothing, but the areas where you started from were less dangerous (with the exception of certain areas like crash sites that had higher level gear - but more enemies). Then, once you had enough gear, you had to make the decision to go into the Dark Zone and then collect enough tech so that you could call for an extraction - which then made you fight against a Hunter (or Hunters if you were playing with teammates and/or if another player got too close to your extraction). It was a real accomplishment to fend off a Hunter, and there was real tension when the helicopter arrived, as other players would try to steal your place on the extraction. The first few weeks (and even months) of Survival were just a joy to play, as everyone was in the same boat in terms of having to figure out a viable way through it.

I was really hoping that they would make a new version of this (with randomized loot locations) in Division II. A nuclear site could be a good fit for this (i.e. instead of the cold killing you, the radiation would slowly kill you).

But, if it is actually just a collection of elements from other modes, I am going to wait and see until I get excited about it.
You must log in or register to reply here.