I loved underworld and played a ton of it. More than a I played of Doom. Doesnt make underworld better just what I was into.
Reactions: tygertrip and Corndog

Now that I actually played both, you have to be out of your mind to say Underworld. Playing that game is like dragging an anchor up a hill, Doom completely outdated that game. It's like comparing System Shock 1 and Bioshock.
Reactions: Majormaxxx
C 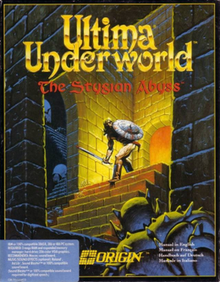 One game has full movement, looking up and down, swimming, numerous mechanics, deep combat, and a rich story, the other you go strafe left and right and occasionally shoot something on screen and that's about it.

Ok, ok, I'm not THAT biased, to your knowledge, but I've always figured that the controversy surrounding DOOM back in the day, amplified but its shareware distribution, caused many PC and even console gamers to 'skip' Ultima Underworld, which arguably is the better and much more influential First-Person action game. So influential in fact, that many modern First person games whether they are shooters or not, use the mechanics introduced from it.

Now DOOM is a fine game, it ran on an engine that was a technical marvel for the time and it had brilliant fast-paced gameplay that set the foundation for FPS games, and not to mention spawning an army of DOOM Clones. But Ultima Underworld was also a technical marvel for it's time, which was only released a year earlier, or less, and offered A LOT MORE in gameplay design.

Ultima Underworld laid the foundation for First-Person games of any genre, it gave you an advanced 3D world, multiple forms of traversal and combat, the ability too look up and down, a large map to explore, and a captivating story. But DOOM received the lions share of coverage due to the controversy about its violence, especially coming off of Wolfenstein 3D which had similar controversy. The first Ultima Underworld, which in my opinion is a vastly superior game on every level, was only enough to keep Looking Glass Studios afloat. If the coverage wasn't so biased, the 2nd Ultima Underworld, which came out the same year as DOOM and was an even greater achievement, would have sold more. This could have meant Looking Glass Studios might have possibly still existed today.

Just to clarify, I don't think DOOM is a bad game, it's a good game, but you had a vastly superior alternative that ended up suffering because of controversial biased coverage grabbing the attention of nearly the entire industry. I feel that Ultima Underworld, its sequel, and Looking Glass Studios suffered due to this. If DOOM and Ultima Underworld were on a more even playingfield, it would be clear that Ultima Underworld was and still is the better game, imo. But it's not just my opinion you need to consider, look at how many more games were influenced by Ultima Underworld than DOOM. Spanning across multiple genres.

Of course, feel free to disagree. I think a discussion comparing the gameplay and influence of both titles would make for an interesting thread.
Click to expand...

I liked it.
You must log in or register to reply here.