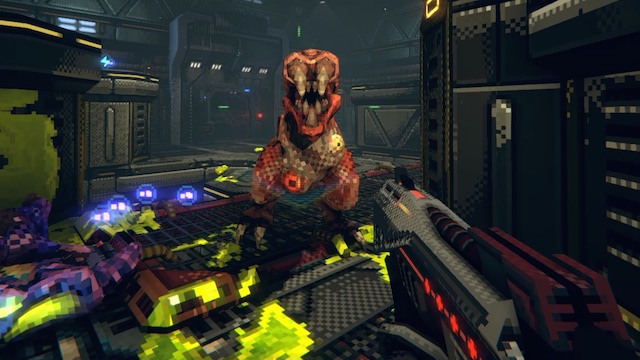 Darkverse:Rogue is an addictive pixel-painted roguelike FPS where you blast your way through a monster-filled spaceship in search of your body.

Darkverse:Rogue is an addictive pixel-painted roguelike FPS where you blast your way through a monster-filled spaceship in search of your body.

Taking place in the tail end of a techno-biological disaster that’s left the universe a dangerous and inhospitable place, Darkverse:Rogue sees you awakening on a spaceship that’s overrun with grotesque alien bio-mutants. The ship was home to more than 35 thousand crew, but now it seems that it’s just you, a helpful AI and a little droid that maps the environment and hacks terminals.

Your consciousness has been uploaded to a body and have no idea where your real body is, which is actually quite handy as you get uploaded to a different body when you die (though your progress resets as in a traditional roguelike). You can carry three weapons at a time (one melee and two firearms), each of which can be upgraded with augments. The melee weapon is often the best choice in combat as they’re pretty powerful and firearms take a while to reload (and ammo capacity is fairly limited).

The demo build features three large randomly generated stages to hack and blast your way though and it’s a lot of fun. There’s a nice variety of weapons and augments, and the monsters offer a real challenge (particularly in some of the larger rooms later on). Even in pre-Alpha it looks and plays wonderfully and using your melee weapons to slice through the monsters is particularly satisfying. Highly recommended.

Wow, never seen a pixelart rogue-like before.
You must log in or register to reply here.

CULTIC - A Crunchy 90's Styled Cultist-Slaying Horror FPS Where the First Thing You Do is Die!
Retro Trailer Indie