Tmack said:
Considering they will announce DG2 soon enough, makes perfect sense to bundle the first one on PS+.
Click to expand...

I wish they updated the store on the iOS app more quickly.

That being said, at least I can redeem my free games through the app.
Last edited: Apr 5, 2021
Reactions: Bo_Hazem

PS plus Singapore got Xmorph Defense instead of the zombie game.

Also I can’t put Oddworld into my library for some reason in the PS App. Maybe because I don’t have a PS5? It simply gives me an error when trying to view the page.

EverydayBeast said:
I give SIE Bend Studios credit on Days Gone, I didn’t love the characters and they have their issues but the post apocalyptic Oregon felt bigger and better (it’s not but still) than most open world games today (Elder Scrolls, Horizon etc.) taking down an entire freak horde is the best thing ever

Raven117 said:
Yes sir. Those are it. Again, careful with the heat. I like it hot so I use the whole can with sauce. Others just use two tablespoons of sauce. Others a few peppers and two tablespoons of sauce. Just put in as much to your comfort level with heat.
If you decide to give it a go, be mindful of the liquid. Beef obviously takes awhile to cook, chicken will be quicker.
Click to expand...

Wait what this is set in Oregon my home state and its gotten a boost on PS5? Guess I finally have to check this out once I beat Yakuza Like a Dragon.
Reactions: chinoXL

When does the games goes live in the US?
Reactions: Bo_Hazem

Aceofspades said:
When does the games goes live in the US?
Click to expand...

Oddworld is midnight in your local time.
Reactions: Bo_Hazem and Aceofspades

Oddworld is up in the US.
Reactions: Bo_Hazem

I was able to get Oddworld now. I guess they wanted it to be up at the same time as every region.
Reactions: Mr Moose and Bo_Hazem

Just played the first couple levels of Oddworld. It's pretty good but something is lacking and I have no idea what yet. Weird vibe.
Reactions: Bo_Hazem

cormack12 said:
Soulstorm is coming to PS+ for PS5 too so that will be the premier next gen PS+ title.
Click to expand...

Why Abe doesn't have the tatoo of his chest?

Played the first level of oddworld, keep in mind I usually don't like side scrollers, but this game isn't great so far.

TexMex said:
Just played the first couple levels of Oddworld. It's pretty good but something is lacking and I have no idea what yet. Weird vibe.
Click to expand...

Dusktildawn48 said:
Played the first level of oddworld, keep in mind I usually don't like side scrollers, but this game isn't great so far.
Click to expand...

I like Soulstorm so far, but I'm not sold on the crafting and looting yet. Get ready to constantly throw bottles of water at fire, throw stun mines and throw brew to light enemies up. You can double jump and gameplay is far more forgivable in general. Game looks excellent though, especially the cutscenes.
Last edited: Apr 6, 2021

Probably take their opinions over mine, I have a hard time getting into these types of games
Reactions: hemo memo

Yeah, but why he is so certain that their will be a Days Gone 2?

No, the game is very good and underrrated. It had a few performance issues at launch that later got fixed or tweaked, and they added nice post launch content. If it would have all that at launch it would have get a 80 MC easy.

But like any other game, it isn't for everybody. If the idea of Sons of Anarchy + Walking Dead open world game with massive zombie hordes is appealing to you, you'll love it.

Because despine not having great reviews, the first one was a success in sales and they are already working on the sequel. It's the best selling Bend game and had the 7th best launch for a Sony published game. Plus seeing they included it on PS Plus Collection, PS Now and PC sounds like they already achieved their sales goal and are promoting the IP to announce the sequel soon, that would released relatively soon. Probably late 2022.

DG1 development started early 2015 and was released in April 2019. During the development and after the studio did grow a lot in headcount. They already have their engine ported to PS4, and this time they don't need to make all that world building job for creating a new IP, its mechanics and so on. They just need to iterate on what they had in the first one to improve it. So compared to the first game they will save work and now they have a way bigger headcount, so it's fair to assume the 2nd will be relased faster. Let's say that instead slightly above 4 years they need this time 3 years and a half: it would be released around late 2022 (if covid didn't fuck them too much).
Last edited: Apr 6, 2021
Reactions: mckmas8808

It's probably a given of a sequel happening, but there's no rumor or anything on the horizon in terms of an announcement.
Last edited: Apr 6, 2021

Dusktildawn48 said:
Played the first level of oddworld, keep in mind I usually don't like side scrollers, but this game isn't great so far.
Click to expand...

I deleted it after the first stage. Game feels awful to play.

kunonabi said:
I deleted it after the first stage. Game feels awful to play.
Click to expand...

Did you feel any input delay? Because I did.

You guys should be playing Zombie Army. That series always delivers. It's like a lower budget Resident Evil 4.
Reactions: Mr Moose, a multicultural team of v, MigueelDnd and 2 others
E

Been trying out Oddworld: New n Tasty and enjoying it. Does Soulstorm feel different to that?

Zombie 4 not showing up as a PS+ title yet when searched. I tried on my PS5, 4, app, and website. Anyone else?

Can you click on ps5 games on your pa4 so when you upgrade you have a collection ready?

Troglodyte said:
Zombie 4 not showing up as a PS+ title yet when searched. I tried on my PS5, 4, app, and website. Anyone else?
Click to expand...

Dusktildawn48 said:
Did you feel any input delay? Because I did.
Click to expand...

I definitely found them to be not responsive enough at the very least.

Still not out in US store

kunonabi said:
I deleted it after the first stage. Game feels awful to play.
Click to expand...

how long is the first level?

Soulstorm does get far better. The first few levels are very scripted, with no one to save. Pretty much evading fire, explosions and all that. Its like they let you play the prologue this time. But after 2 or 3 chapters the game becomes like classic Abe's Exodus. I haven't used items since either.

There is some lag with jumping. The gameplay isn't as responsive as Odyssee I think which is weird as that game was on Unity (though runs absolutely perfect on PS5) but I wouldn't say its that bad either. There is also more leeway with double jump etc.
Reactions: Mr Moose, Con-Z-epT and Dick Jones

Deleted after about 15 minutes.
Reactions: Putonahappyface and Con-Z-epT

I simply can’t abide the sort of floaty mechanics it has, in terms of basic movement. There are so many good games out there, even indie titles, that have perfected moment to moment gameplay; not going to waste my time on this one. 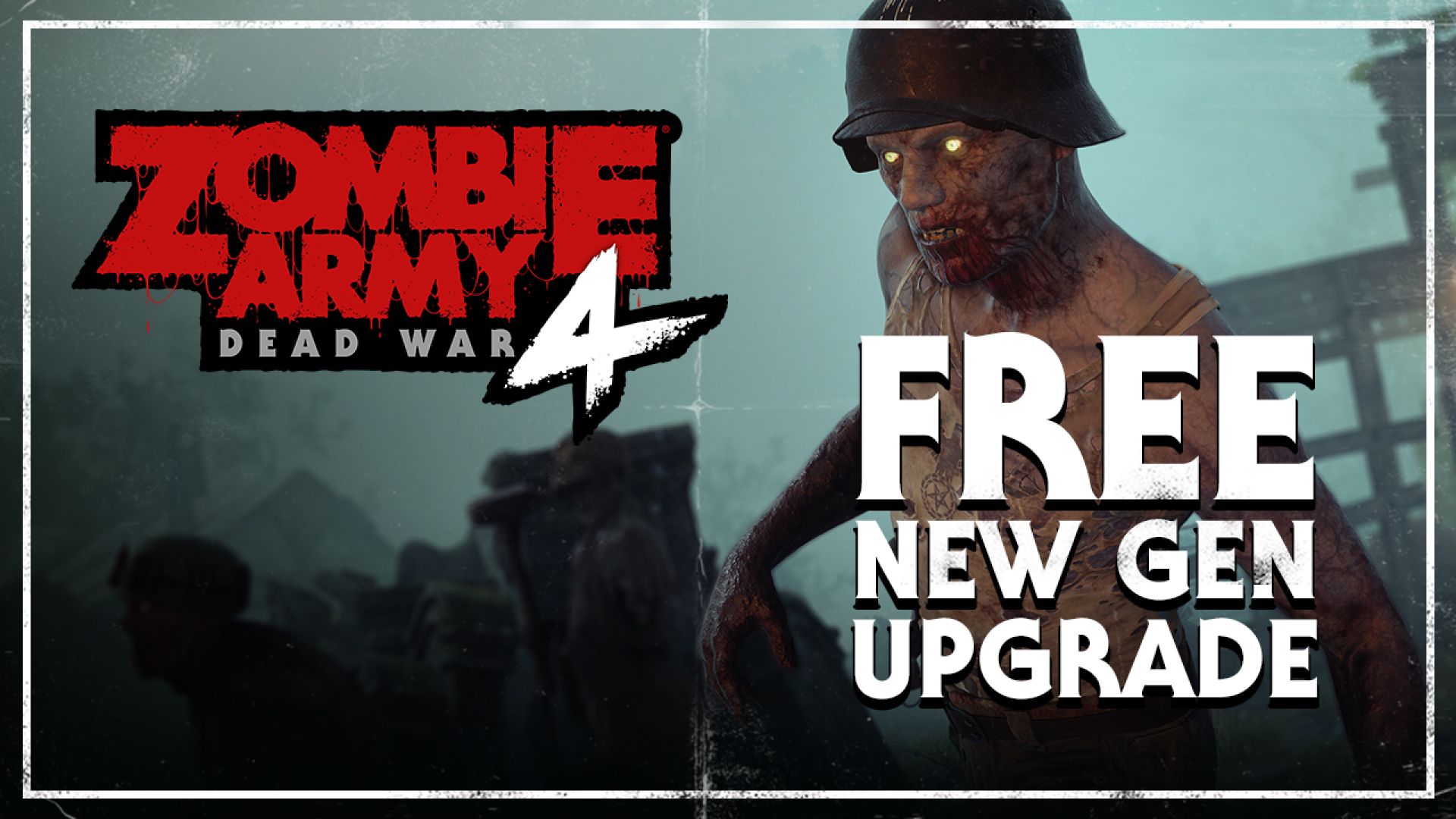 We’re delighted to be able to announce that Zombie Army 4 is getting New-Gen upgrades on both PlayStation and Xbox hardware! Starting Tuesday, players can enjoy faster frame rates, higher resolutions and reduced loading time on the platform of their choice! In addition, Zombie Army 4 is on PlayStation Plus for the month of April, and will be coming to Xbox Game Pass in the near future, so there really has never been a better time to play with friends!

Here are the lists of upgrades for each platform, alongside the dates they will be going live;

*DRS enabled - The resolution of the image can drop below the target to ensure a smooth FPS.

*DRS enabled - The resolution of the image can drop below the target to ensure a smooth FPS.

Oh, that's great. Cant wait for ANOTHER ONE
Reactions: saintjules

Played the first level of Oddworld. Aside from the graphics and DualSense support, it really feels suck in the PSX era.
Reactions: Mr Moose

xrnzaaas said:
Hell no, a lot of the woke journalists hated it because of the biker wedding scene. Also the game had tons of bugs & performance issues on launch, but the vast majority of them have been fixed. It's one of Sony's best open world games from last gen.
Click to expand...

A lot of violence also

Zombie Army 4 seems stupid. But sometimes stupid can be fun. I laughed out loud at the intro video when I got to "Hitler woke the dead". Laughed out loud the second time when I got a slow-mo for a nut shot (which I totally think should be a thing in addition to headshots). By the time I saw the first suicide zombie I was laughing so hard that I was unable to shoot it and got killed. Stupid, but fun.

But I'm unable to do co-op with a friend between PS5 and PS4. Has anyone got this to work? I suppose it must be the game and/or servers, other games have been fine.
Last edited: Apr 7, 2021
You must log in or register to reply here.