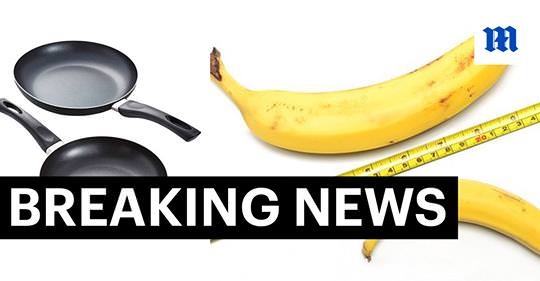 Men's penises are half-an-inch SMALLER if they are exposed to high levels of chemicals in non-stick frying pans and fast food packaging, study finds

Men could end up with penises half-an-inch shorter than usual if their parents were exposed to high levels of a chemical used in non-stick frying pans.

Scientists have found the chemicals, called PFCs, can interfere with male hormones and lead to sexual organs being 'significantly' shorter and thinner.

And this effect is not only seen in the womb, the researchers said. PFCs could have toxic effects in teenagers, too.

The chemicals, also found in waterproof clothing and greaseproof packaging for food, get into the bloodstream and reduce testosterone levels.

Scientists found young men who grew up in an area polluted with PFCs have penises 12.5 per cent shorter and 6.3 per cent thinner than healthy men.

Researchers at the University of Padua in Italy made the discovery after measuring the penises of 383 men with an average age of 18.

Padua, near Venice, is in one of four areas in the world known to have high levels of PFC pollution, which used to be used in Teflon coating until it was phased out in 2013.

The chemicals, officially called perfluoroalkyl compounds, are also a health hazard in Dordrecht in the Netherlands, Shandong in China, and West Virginia in the US.


The Italian researchers found PFCs will bind to testosterone receptors and reduce levels of the male sex hormone used in the body.

As a result, men grow up with smaller penises, less healthy and mobile sperm and a shorter distance between their scrotum and anus – a sign of lower fertility.

'As the first report on water contamination of PFCs goes back to 1977, the magnitude of the problem is alarming,' said the researchers, led by Dr Andrea Di Nisio.

'It affects an entire generation of young individuals, from 1978 onwards.'

PFCs come in hundreds of forms and are widely used to make everyday products more convenient and longer-lasting.

But their toxic and potentially cancer-causing effects are only in the early stages of being understood by scientists.

The chemicals can get into the body by being absorbed by the intestines from food and drinking water, or be breathed in.

From here they get into the bloodstream and can be toxic for foetuses when consumed by the mother and for teenagers, who undergo big hormonal changes.

For men, being exposed to PFCs while in the womb can result in higher levels of female hormones in adulthood, and developing smaller penises.

All were from the Veneto region of Italy, but were categorised by whether they lived in a red, yellow or green zone based on levels of PFC pollution.

Part of the region is highly polluted because run-off from a chemical factory and wastewater treatment plant made it into a major river and the drinking water.

The non-exposed men (green zone) had an average flaccid penis length of 10cm (3.9ins) – measured along the top from body to tip – while the men in the polluted areas were just 8.75cm (3.4ins) long.

Their penises were thinner, too, but by a smaller margin: the healthy men measured 10.3cm (4ins) in circumference compared to 9.65cm (3.7ins) for the polluted penises.

Dr Di Nisio and his team said not much can be done about the problem until PFCs are banned or phased out, and even then the problem is likely to continue.

PFCs are highly stable chemicals and the ones already released into the environment are expected to remain there for longer than the human species.

'This study documents that PFCs have a substantial impact on human male health as they directly interfere with hormonal pathways potentially leading to male infertility,' the researchers wrote.

And Dr Di Nisio told IFL Science: 'At least here in Italy, it is very difficult to know if a product contains these chemicals.

'In the case of a product where it is explicitly stated "PFOA-free", I do not feel safe anyway, because PFOA is only one of hundreds of possible PFC compounds, and they can all be dangerous.

'Therefore it is very hard to avoid any contact with any PFC.'

PFCs used to be used in Teflon coating on non-stick frying pans but were phased out in 2013 and replaced with a less controversial chemical.

DuPont and Chemours, the manufacturers of Teflon, had to pay a $671million (£525m) settlement last year following the spillage of PFCs into a river in West Virginia.

The leak allegedly contaminated local water supplies and was linked to diseases including testicular and kidney cancers.

Chemours now makes non-stick coatings with a chemical called PTFE, which it says does not have any PFCs in it.

Despite some high-profile companies phasing out the use of damaging PFCs, they are still used around the world in imported goods, the Environmental Protection Agency says.

The research was published in the Journal of Clinical Endocrinology and Metabolism.

Note to self: Remember to yell "non-stick frying pans" if I'm ever pantsed in public.

I guess I have never been anywhere near one of those.

I knew someone would mention that.

"Hey baby, I'm full of PFC, I might be smaller, but I'm convenient and I can last a lot longer."

I slip right in. You slide right off.

Proteus said:
I guess I have never been anywhere near one of those.
Click to expand...

I don't like 'em putting chemicals in the pans that turn our dicks small.


Or probably not...but telling people you're shrinking dicks is a great way to get headlines if nothing else. This study seems to conclude that it's blocking testosterone, which could have had any amount of impacts to measure...but for whatever reason they told everyone to whip it out and got out a ruler.

There are lots of chemicals in our products that interfere with androgens.

Real Men™ shouldn't be using non-stick pans. The only reason why food sticks is because you didn't use enough FAT. Are you some kind of soy boi?!?! A cast-iron skillet held over a campfire, seasoned in the fatty tissue of a fresh kill, should be the default mode of cooking.

Why would my imaginary anime girlfriend care about my tiny micro dick? This article was written by a total loser lmao

Or maybe people are just getting fatter LOL.

I guess everyone on GAF can finally find a way to reduce there 10 inch dongs.

Men from Padua are never going to admit their hometown after this.

From a similar report:

Part of the region is highly polluted following the contamination of a major river and drinking water source with run-off from a chemical factory.
Click to expand...

This is likely not anything you or your sons need to worry about. I feel bad for those Italians, though.

Daily Fail at it as usual.

I don't doubt that chemicals in shampoo, utensil fabrication etc lead to hormonal changes. Sperm counts have dropped dramatically since the 1950's and gilrs are reaching puberty and having their periods as young as 9 in some regions.

But drawing from this such specific measurement stats for specific body parts is ludicrous.

my frying fan gave me a micropenis
C

With this news I am disappointing my son before he is even conceived.

More and more evidence of this is being found all the time. As I've shared countless times now, I was a victim of epigenetic endocrine disruption by Diethylstilbestrol - causing me prenatal sexual differentiation and transgender brain neurology.

These chemicals are vast and have been all around us for decades. People know a little about it, but usually just shrug it off as no big deal. The global fertility rate is down by around 40% what it once was...men have lower testosterone levels, sperm count, and interest in sex....and more and more people are being born intersex or transgender.

The world is very slowly heading toward a real life "Children of Men" scenario...a world where global infertility is a scary possibility. We need to be aware of these dangers, and finally start making some drastic changes to prevent further damage.

If anyone is interested, I highly recommend this free documentary:

MrTickles said:
But drawing from this such specific measurement stats for specific body parts is ludicrous.
Click to expand...

Not to mention the possibility of reverse causation.

Damn you non-sticking frying pan! I AM ALREADY ASAIN!

I recently got a frying fan from my ex as a house warming gift.....

Jesus Carbomb said:
For god sake, will a mod please give this man his tag ...
Click to expand...

Jesus Carbomb said:
For god's sake, will a mod please give this man his tag ...
Click to expand...

"Smaller than Advertised" with a link to the post.

Ok this is becoming a dog pile (of small dog dicks) and I will report you all for abusing my no no parts.

I like the way you think, Dirk. It's mean and borderline hateful but I like it!
D

Pretty sure it shrinks brain capacity as well. Would certainly explain the misguided anger and abundance of stupidity at another forum.

Since I buy “The Rock” frying pans, does that make me “rock” harder?
Last edited: Dec 6, 2018
You must log in or register to reply here.

Is the reason women get more knee injuries than men in sport due to periods?