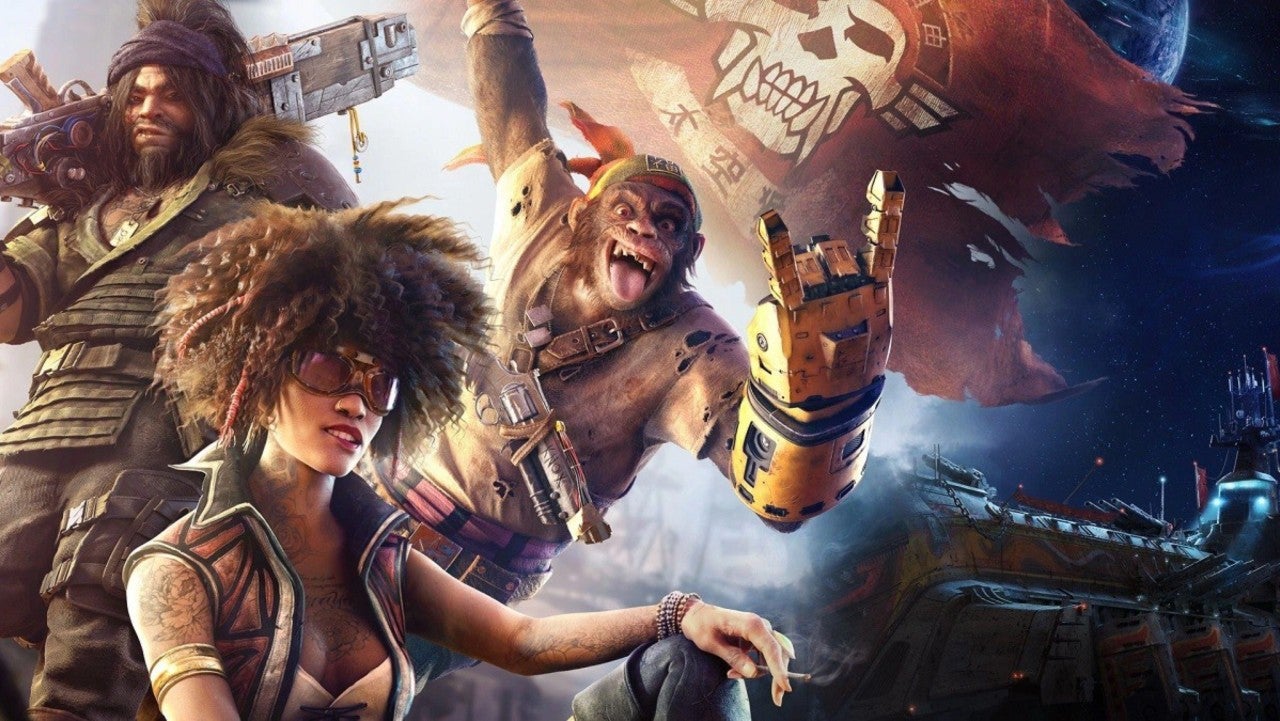 Beyond Good and Evil 2 Update Shared by Ubisoft

Ubisoft shared an update on Beyond Good and Evil 2 this week, but for those looking forward to the [...]

Ubisoft shared an update on Beyond Good and Evil 2 this week, but for those looking forward to the game’s eventual release, this probably isn’t an example of no news being good news. During an earnings call amid its latest financial report, Ubisoft said it’s somehow still “too early” to talk about the game much despite it being in development for years now. The publisher did at least confirm that the game still exists, so people can rest assured knowing Ubisoft hasn’t ditched it after all this time.

Frederick Duguet, the CFO of Ubisoft, responded to a question shared during the latest earnings call that referenced Beyond Good and Evil 2 and asked about when we might be seeing more of the game. The fiscal year of 2024 was tossed out there as part of the question, too, which itself is a long ways away for a game that’s been worked on for an even longer time.

“We've progressed well with Beyond Good and Evil 2, but it's too early to tell you at this stage,” Duguet said when asked about the game.
Reactions: CamHostage, fatmarco, jaysius and 7 others

It's a shitty company so the game will be shit. That trailer was as fucking cringe as it gets
Reactions: Brigandier, poodaddy, ZeroZeroQuatre and 12 others

"too early to talk about the game"

I would be very interested in a poll for who on the forum played BG&E 1. There can't be that many people left.
Reactions: Blond, Spaceman292, yurinka and 1 other person

The original Beyond Good and Evil was a very good game, and there was a lot of excitement when the sequel was first announced. However, the prolonged development of BG&E2, plagued by a seemingly endless stream of delays, has eroded confidence in the game.

BG&E2 has turned into a running joke for Ubisoft now. It's not surprising for a generation to pass before a well-regarded game receives its highly anticipated sequel, but we're usually talking about console generations, not human generations.

If we have to wait 2 or 3 more years for an update, then it's evident that the game is suffering from an abundance of development difficulties. Either hand the design document to a new development team (possibly an external developer) so they can start over from scratch and get the game out sometime within our natural lifetimes, or scrap it for good. The excitement has vanished, and it will take a miracle to revitalize it.
Last edited: Jul 22, 2021
Reactions: TheThreadsThatBindUs and kanjobazooie

How is it "too early" to discuss? This game was announced over a decade ago....

The gameplay looked pretty sick the last time they showcased it. What is causing the development hell I wonder? Longest development period for a videogame

The Guinness World Records Official site with ultimate record-breaking facts & achievements. Do you want to set a world record? Are you Officially Amazing?

Ubisoft can't figure out how to inject the Assassin's Creed formula into the game.
Reactions: gojira96

I'm deeply intrigued by the game world size and the promise of a detailed planet to explore to a point of being able to travel through space.

But the fact that it was somewhat revealed to be a GAaS game during the last 30 minute deep dive killed my hype.

I hope the silence is them figuring shit out.

But I'm okay with it dying off it it means we get to live in a time where BG&E didn't have a sequel that had nothing to do with the original and just exist to make fans feel nostalgia and buy a live service game we will all despise for spitting on the name and being nothing what the fans wanted.

This game will never release cause Ubisoft put 8695 of their empoyes on their next AC game while around only 2 or 3 people on the Beyond 2 game.

mortal said:
How is it "too early" to discuss? This game was announced over a decade ago....

The gameplay looked pretty sick the last time they showcased it. What is causing the development hell I wonder?

they decided to turn it into a gaas mid-development.

ubisoft is more tonedeaf than EA. sitting on ip like splinter cell, while chugging out turd after turd which no one wants?
Reactions: mortal, MadAnon and ArtemisClydeFrog

Basically they are confirming it's vapourware.

Didn’t Ancel announce an early retirement lately ? I guess the project can continue without him, but he’s probably the main reason it exists to begin with.
M

I can already imagine the reason of all these delays. Probably restucturing the whole thing to make it monetization friendly.

Velius said:
It's a shitty company so the game will be shit. That trailer was as fucking cringe as it gets
Click to expand...

Same studio (Montpellier) that made Rayman Origins and Legends, their last 2 games.
Reactions: TheThreadsThatBindUs and kanjobazooie

Beyond Woke and LGBT
Reactions: Dr. Samuel Hayden, RaySoft and A Most Virtuous Cat

We'll have PS5 DoubleplusPro and Xbox Series XZ before this game finally launches, and spoiler alert: it's just watch dogs but with animal heads and spaceships.

Hate these "please be excited, we might launch a game you should like in a decade from now" announcements.
Remember the WiLD game? Another Ancel vaporware It was announced 7 years ago, when the PS4 and Xbox One were in the "launch phase". Of course again, supposedly the development is "going well" lol
Last edited: Jul 22, 2021

They should sell some 3d ships at this point.

Ubi has made a strategic pivot to F2P.

How is anyone possibly hopeful about where this ends up?
Reactions: EL BABE, Flabagast and kanjobazooie

Majima Everywhere System said:
I would be very interested in a poll for who on the forum played BG&E 1. There can't be that many people left.
Click to expand...

It was never a big hit to begin with.

And it came out at a time when people were open to embracing games with a strong female protagonist.

These days every attempt at this is looked at with a very critical lens. The moment there's even one minor thing off about the game it'll become SJW or far right fodder. It makes no sense to ever release this. There are no fans left (enough to make it profitable). It's not aligned to Ubi's strategic vision. The only advocate for it (Ancel) has quit. It's only going to poison their image from a PR perspective. There's zero good to come from this. If Ubi was smart, they wouldn't just cancel it, they should print out the source code and livestream them shitting on it.
Last edited: Jul 22, 2021

You can already tell this game went through tons of changes and considering Ubisofts new financial planning going forward, it's clear this will be a coop live service game.

So the news that Ubisoft shared about Beyond Good and Evil 2 is that they have nothing to say.

Weird how they can pop out Watch Dogs, AC, Farcry and whatever within twelve months, but this is just dead in the water.

Good luck to them.
R

Is this now a record for the longest time between initial announcement and "We're working on it"? Must be close
Last edited: Jul 22, 2021

It is NEVER EVER coming out.
Reactions: jaysius

Can't believe they are taking 20 fucking years to develop this
Reactions: jaysius

Ubisoft’s latest news and announcements got me very worried about the future. This sudden change into GaaS, F2P stuff, Far Cry 7 going to a very different direction, AC Infinity…

I think that’s the definitive end for Ubi.

I think that’s the definitive end for Ubi.
Click to expand...

I have to admit, i'm a bit surprised they are messing with Far Cry, and especially Ass Creed, as they are huge sellers for them.
I think its best to wait and see how these games turn out.

Whatever happened to the community thing where people could submit art to be used in the game?

RyRy93 said:
Is this now a record for the longest time between initial announcement and "We're working on it"? Must be close
Click to expand...

Star Citizen. Apparently Chris Roberts didn’t even own a computer until recently.
J

It's going to be converted to a F2P GaaS.
Reactions: jigglet
H

The first game is one of my favourite games made. My excitement for this game died about 2010
Last edited: Jul 22, 2021

I don't think I care anymore. The first game was great though. But that's in the past now.

I bet my left nut the game being in development hell and they had to scratch one more time for the sake of making it a Live-services/GaaS game. Ubisoft can't fool anyone at this point. Ubisoft stated, their business strategy moving forward is to change most of their IPs to GaaS, so fuck you if all you wanted a simple sequel to Beyond good and evil, Splinter Cell, or AssCreed ∞.
Last edited: Jul 22, 2021

I don't even remember the story of the first game at this point.

As painful as it is (as I LOVED BG&E1) no one should have been surprised this game is vapourware.

The moment they announced their plans to crowd-source game content, it showed Ubisoft was no longer interested in giving the game a proper budget. I'm sure it's been a small team working on this, concepting and prototyping for over the last 12 years.

Based on the comments in the OP, it's clearly not in full production and the project has probably gone through a big change in direction to become more GaaS focused now that Ancel is gone.

So this is the second game that Ubisoft has tried to develop that ended up becoming a development nightmare there was just an article about Skull and Bones the pirate game that just reached Alpha after eight years.

Beyond good and evil was already met with huge downvotes because of their always online BS where most people just wanted a single player adventure game.

Ubisoft obession with GAAS games is gonna bite them in the ass just ask EA their now former CFO said single player games was not what people wanted, and EA releases a single player only game with Jedi Fallen Order and it sells over 16 million copies greenlighting a sequel immediatley.
Last edited: Jul 22, 2021

Beyond Dead and Buried
Reactions: Piggoro

This is t the sequel I wanted or asked for, Ubisoft.
P

The ambition behind this game is astounding, that demo going from planet to space remains one of the coolest game moments I’ve seen in awhile. Games of this size take time.

Also anytime this game comes up, people seem to be upset that it’s a prequel. If you played and finished the first game you know that there were some interesting revelations about Jades is past that we’re barley touched on in that game.

Theres a lot of potential with this one! I remain optimistic until given a reason to believe otherwise

At this point who really cares.
There's only 2 outcomes

-It gets cancelled
-It releases and it's just another crap Ubisoft game, following the same template as all their other games, with a terrible story as all their other (modern) games, full of grindy GaaS crap where you can go fight a bunch of different types of bullet sponges to grind for better loot!.
You must log in or register to reply here.