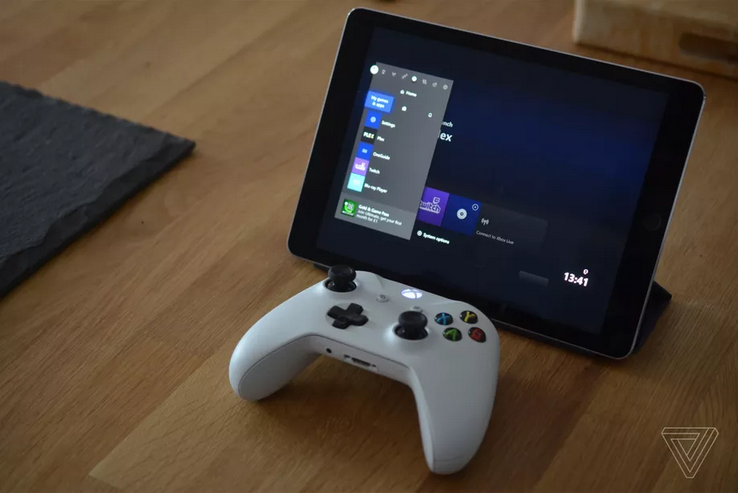 Apple is bringing Xbox and PlayStation 4 controller support to the iPhone, iPad, and Apple TV this fall. It’s a big change from the select MFi Bluetooth controllers that were supported before, and it means you can now easily connect any PS4 or Xbox One controller to your device to play games on the go.

I’ve been trying out an Xbox One S controller (with Bluetooth support) on my iPad Pro running the new public beta, and I’m convinced this is a big step toward using an iPad as a portable game console.

While all PS4 DualShock 4 controllers support Bluetooth and will work fully, over on the Xbox side, you’ll need to make sure your controller supports Bluetooth. If it has a headphone jack at the bottom, then you’re good to go.

Pairing a controller is as easy as any other Bluetooth device, and most games that already support MFi controllers will immediately detect that the Xbox controller is present and work as you’d expect. I’ve been playing Real Racing 3, Grand Theft Auto: San Andreas, and Fortnite, and I’ve even managed to stream Xbox games from my console, thanks to a third-party app.

Sony’s PS4 Remote Play app now supports native DualShock 4 controllers, thanks to iOS 13, so you can stream games from your PS4 directly to your iPhone or iPad and use the controller you’re more familiar with. This is a good step if you want to play PS4 games remotely, but Microsoft doesn’t yet support this for Xbox games.

With Console Streaming from your Xbox One you'll be able to:

Turn your Xbox One into your own personal console server

Stream your Xbox One library, including Xbox Game Pass, for free

Where you play is entirely your choice. Going into preview in October. #XboxE3 pic.twitter.com/TmszGgBk21
— Xbox (@Xbox) June 9, 2019
Click to expand...

Microsoft is releasing its own Console Streaming remote play solution in October. Until then, OneCast, a third-party app priced at $11.99, is the next best thing and works with the Xbox One controller on iOS 13. You’ll be able to access your console within your local Wi-Fi, but things like the Xbox home button don’t seem to work just yet through OneCast.

This controller support also extends to the Apple TV, so you’ll be able to connect an Xbox or PS4 controller and play supported games on a bigger screen.

I usually play games on the go, thanks to the Nintendo Switch, but the smaller 6.2-inch display, 720p resolution, and general performance pale in comparison to most modern iPads, especially the pricier iPad Pro models. I haven’t really taken games on the iPad seriously before, as the controller support was lacking and titles just didn’t exist. Just like Fortnite on an iPhone X was an exciting look at the future of mobile gaming, this new controller support in iOS 13 is the next logical step.

It comes at a key time for the gaming industry, as giants like Sony, Microsoft, and Google are all focusing more heavily on game streaming services. While Microsoft and Google haven’t committed to xCloud or Stadia running on an iPhone or iPad just yet, this additional controller support makes things a lot easier on the Microsoft side. Google is connecting its own controller directly to Stadia instances.

Apple has also been aggressively improving its iPad and iPhone chips to better support games, and we’re at a turning point where we could start to see some interesting titles beyond popular games like Fortnite and PUBG emerge on Apple’s devices. Apple isn’t betting on game streaming itself just yet, but it is tempting game makers into its own Apple Arcade subscription that will offer up exclusive titles for the iPhone, iPad, and Apple TV.

We’re heading toward a future where you can just bring your phone or tablet with you to play AAA games on the go, whether those are streamed to the device or running natively. Performance is always going to be better in front of your TV with a real console or PC powering your games. But if you’re heading on vacation and don’t want to have to drag an Xbox or PS4 with you, the iPad is shaping up to be a good alternative.

Heh....
Been able to do that on Android for ages now

There's plenty of ways to stream your consoles and things locally, and over the internets, to a multitude of devices

I guess congrats on Apple for joining the modern age??

Those of us who actually have decent mobile broadband are still out of luck.

PlayStation only remote plays on iOS via WiFi only and I’ve no idea why (except that they don’t want complaints from people with crap mobile internet).

Believer1 said:
Those of us who actually have decent mobile broadband are still out of luck.

PlayStation only remote plays on iOS via WiFi only and I’ve no idea why (except that they don’t want complaints from people with crap mobile internet).
Click to expand...

It's the same on Android too (or was, the last time I had an Xperia phone - haven't bothered to mess around with the unofficial APKs). Which sucks, but I guess there are mobile backwaters *cough*the US*cough* where data caps are so commonplace that it makes sense.

Using my phone as an AP and using remote play on a laptop works fine though, so it's not a matter of bandwidth/latency.

don't use onecast it's wank

I have an iPad pro 12.9 gen 3 and controllers. Cant think of anything I would want to play off my iPad with a controller though? I mean waiting for xCloud or whatever so I can play xbox on my ipad while i watch baseball on tv
You must log in or register to reply here.