With APUs included, it looks quite unusual.

Jon Peddie Research has released its Q2 2019 GPU market results, and it's official: AMD shipped more graphics unit than Nvidia for the first time in five years, thanks to AMD shipping almost 9.85% more GPUs than in Q1 (by comparison, Nvidia sold about the same). The market share data represents cumulative shipments of all types of desktop PC graphics units, including those present in processors, which is an area that Nvidia doesn't have a significant market presence.

The last time AMD led in GPU shipments, the Radeon R9 290X was the fastest gaming GPU you could buy, and Nvidia had not yet released the performance powerhouse that would be Maxwell. Nvidia has been the market leader ever since the Maxwell-based 9-series GPUs launched, but it seems AMD has finally gotten over it at last.

Jon Peddie Research also reports that discrete GPUs were in fewer PCs than last quarter (from 29% to 27%), that the PC market increased by 9.25% since last quarter, and that AIB sales actually declined 16.62% since last quarter. Despite the overall market growth, Nvidia didn't ship significantly more or less GPUs than before, unlike AMD, which had a large jump in sales. 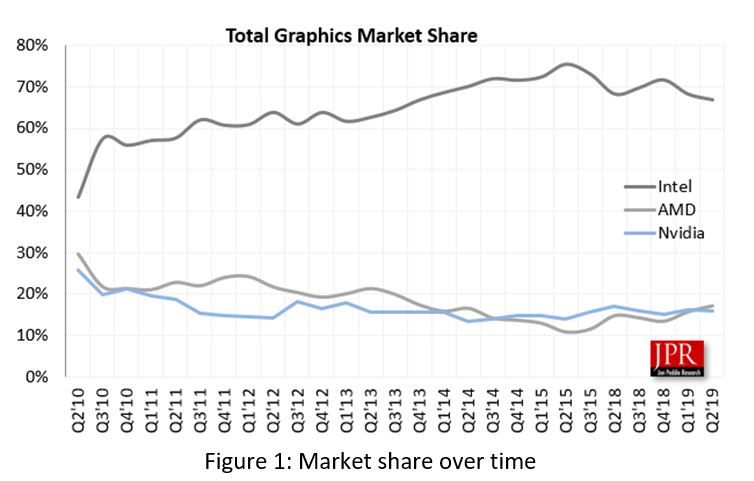 AMD has taken the lead over Nvidia in overall graphics market share for the first time in five years.

The market share data represents cumulative shipments of all types of graphics units, including those present in processors and consoles, both of which are areas that Nvidia doesn't have a significant market presence.
Click to expand...

Update 8/29/19 7:55am PT: Jon Peddie Research provided us with more market share information, which we added below. We also removed reference to graphics units present in consoles, as the report only quantifies PC-based graphics units.
Last edited: Aug 29, 2019
Reactions: Shin

In that case, they did well for a launch quarter, but these numbers still include AMDs integrated graphics (APU) so it's not an apples to apples comparison. See Intel's Share, killing both Nvidia and AMD.

That being said, good on AMD for improving their condition in this area.

I wouldn’t count a APU as a dedicated GPU even though they offer decent graphics performance.
Good for AMD, glad to see them give Nvidia some competition and when Intel joins the dedicated GPU market even more of a push .
Saying that I still prefer Nvidia GPU’s they offer better driver support, one is not necessarily better than the other, as both have areas where they excel and where they leave something to be desired. For the most part, AMD is better when it comes to budget and mid-range cards, whereas Nvidia is the only way to go for high-end graphics cards.
Last edited: Aug 29, 2019
Reactions: Leonidas

I wonder if Intel will ever be overtaken in overall GPU shipments
Reactions: Allnamestakenlol and DESTROYA

Leonidas said:
In that case, they did well for a launch quarter, but these numbers still include AMDs integrated graphics (APU) so it's not an apples to apples comparison. See Intel's Share, killing both Nvidia and AMD.
Click to expand...

That is literally the first sentence in OP.


Leonidas said:
I wonder if Intel will ever be overtaken in overall GPU shipments
Click to expand...

Lisa is working on it, but it's more likely that Intel will overtake nVidia in discrete GPU shipment.

Nvidia gpu shipments are a joke, shit's always out stock.

If nothing else its good PR for AMD...

Boss Key said:
If nothing else its good PR for AMD...
Click to expand...

In this case it's not just PR. This is a real thing. AMD is on the come up.

I totally agree! And Ryzen is helping to propel that. I really can't wait to see big navi and what the consoles have for us as far as advancements go.
They definitely have a long road ahead of them in the GPU sector and even if they can't beat Nvidia coming in at a close second and staying competitive is a win win for gamers and AMD.
Reactions: mckmas8808

How about only dedicated GPU comparison?

I want to see a comparison between CPUs (Intel vs AMD market share) to draw a better picture of the situation... at least we know Intel CPUs with integrated graphics had a drop in market share.... AMD probably have a rise with Ryzen so that explain why nVidia lost market share.
Last edited: Aug 29, 2019

From my take. They shipped more GPUs cause consoles.
Reactions: mckmas8808 and Spukc

Good, Nvidia needs a fire lit. They’ve been playing on easy mode lately and I’d rather see them sweat a little.

zeorhymer said:
From my take. They shipped more GPUs cause consoles.
Click to expand...

Actually the article did not include consoles (it was a mistake from the writer).

That is why that research is useless about nVidia... it does a good job showing AMD increasing sales over Intel after the latest Zen launches.
Last edited: Aug 29, 2019
Reactions: Leonidas

Yeah, and Intel has started shipping some mainstream CPUs without GPUs so that has contributed something to Intel's >1% drop.
Last edited: Aug 29, 2019

ethomaz said:
it does a good job showing AMD increasing sales over Intel after the latest Zen launches.
Click to expand...

Definitely agree. It's good to see AMD coming back from the ashes for so long.

www.jonpeddie.com
Last edited: Aug 29, 2019
You must log in or register to reply here.