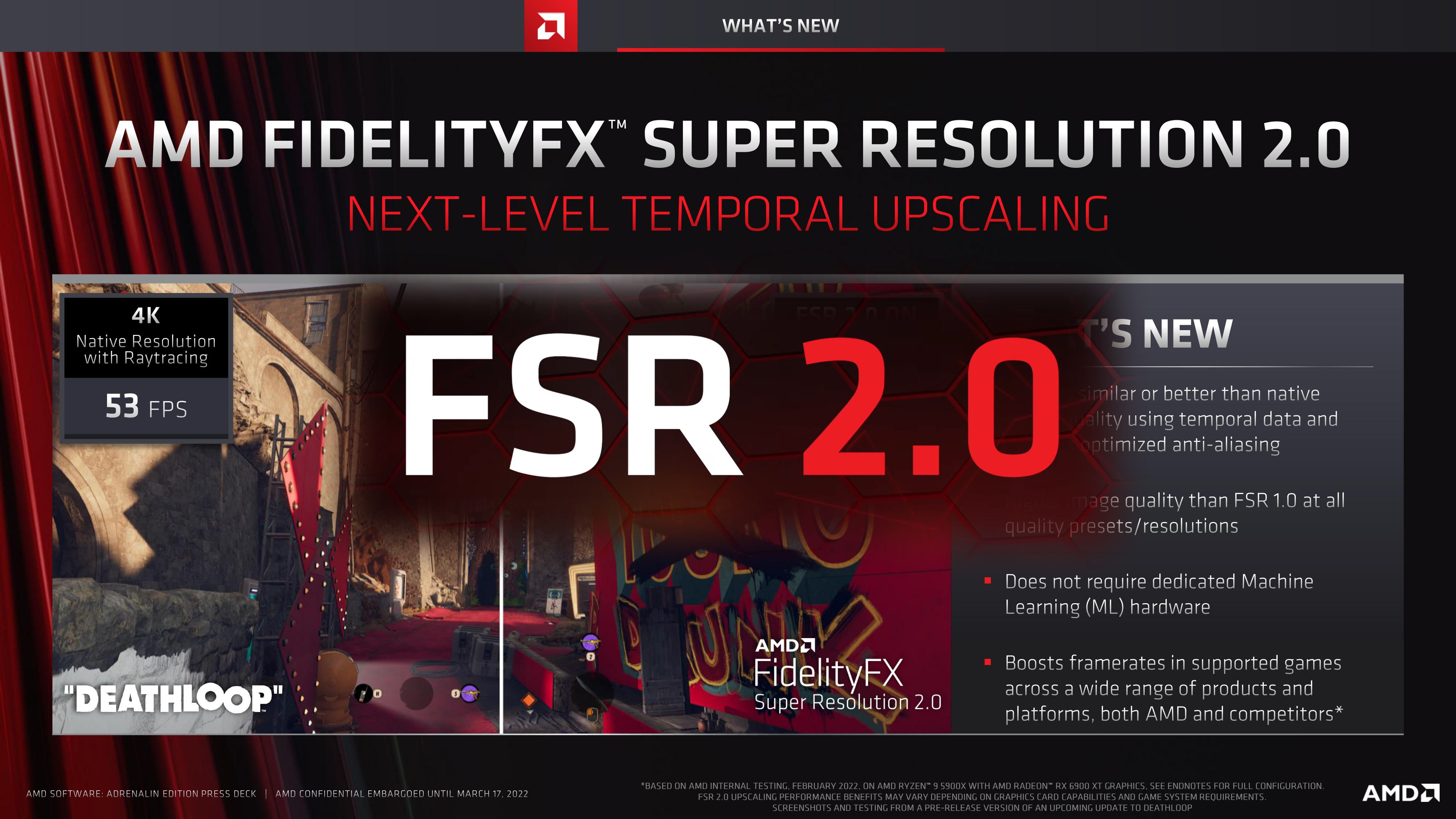 Today marks a year since gamers could try out AMD FidelityFX Super Resolution technology for themselves with our spatial upscaler – FSR 1. With the introduction of FSR 2, our temporal upscaling solution earlier this year, there are now over 110 games that support FSR. The rate of uptake has been very impressive – FSR is AMD’s fastest adopted software gaming technology to date [1].

So it seems fitting that we should pick this anniversary day to share the source code for FSR 2, opening up the opportunity for every game developer to integrate FSR 2 if they wish, and add their title to the 24 games which have already announced support.

As always, the source code is being made available via GPUOpen under the MIT license, and you can now find links to it on our dedicated FSR 2 page. Along with the FSR 2 API, and the full C++ and HLSL source code behind it, you’ll also discover our Cauldron-based sample and comprehensive API documentation to help you with your integration. We put a lot of effort into the documentation to help developers with their integrations as much as possible, so you can add FSR 2 to your game or engine and really achieve the highest possible quality. Please check it out!

The version you’ll be downloading today from GitHub is v2.0.1, which reflects the ongoing improvements we’ve been making since you would have first seen FSR 2 in action earlier this year.

FSR 2 supports both DirectX 12 and Vulkan, with plugins for Unreal Engine 4.26/4.27 and Unreal Engine 5 due very soon. It will also be available through the Xbox Game Development Kit.

Note that FSR 1 can still be exposed as its own upscaling option in addition to FSR 2 in game titles. Both technologies have different characteristics which may be suitable for a wider range of platforms and user preferences. For example, our FSR 2 partner title DEATHLOOP exposes both.

We’re really excited to finally get the source code, docs, and the sample out to developers, so head over to our updated FSR 2 page now to see what’s new!

This means anyone can use it, change it, tweak it and improve it.
So more and more games might start using FSR 2.0, even on consoles.

Getting better and better.

Anyone got a list of FSR 2.0 games so far? Also which are these 24 upcoming games with FSR 2.0 support?

This is a godsend and I honestly never thought a free for all solution like FSR could get so close to DLSS quality with just 2 iterations. We might never need native resolutions again.
Last edited: Jun 22, 2022

I watched that GoW analysis that DF i think did, the performance gains are decent, and the game looks okay, but that pixelated shadowing(disocclusion) is a deal breaker for me.

SamaelSavage said:
I watched that GoW analysis that DF i think did, the performance gains are decent, and the game looks okay, but that pixelated shadowing(disocclusion) is a deal breaker for me.
Click to expand...

They will continue to improve the algorithms it uses. Every game that shows a weakness will be used to improve it.
It's an excellent upscaling tool with alot of potential.
It already exceeds the one found in Unreal Engine and the Sony one.

Going open source is such a power move.
AMD without a doubt has amazing engineers and talent but the OSC also has some truly blessed people.

I can see some good and nice updates come from the OSC that'll make FSR a even sweeter deal.
You must log in or register to reply here.