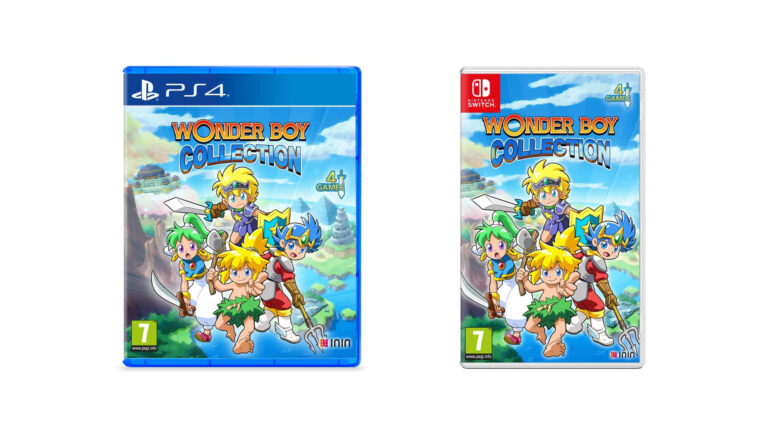 Amazon U.K. has listed the unannounced Wonder Boy Collection from ININ Games for PlayStation 4 and Switch. This follows an Entertainment Software Rating Board rating earlier this month, and a brief GameFly listing under the title Wonder Boy Classics in October 2020.

The Amazon U.K. listings include the box art and description, which confirms it contains the titles Wonder Boy, Wonder Boy in Monster Land, Wonder in Monster World, and Monster World IV, each updated with modern features such as filters, shaders, a rewind option, and an art gallery. The release date is listed as June 22.

Here is an overview of the collection, via Amazon U.K.:

Bringing together four of the very best Wonder Boy games—from the original 1986 arcade version to 1994’s Monster World IV—this remarkable collection gives you a chance to experience one of the most influential series from gaming’s past.

Through the 1980s and 1990s, the Wonder Boy games built up a huge following with their dazzling blend of energetic platforming and action–RPG gameplay. Unlike other titans from the platform genre, however, the Wonder Boy games have seen very limited release in the West on modern gaming hardware. Until now!

The Wonder Boy games are designed to be simple to pick-up and play for gamers of every ability—but contain enough depth and challenge to keep even the most skilled players busy. And now they’re updated with modern features such as the ability to rewind your game at any moment.

So whether you’re looking to try this iconic gaming series for the first time, revisit a youth spent playing Wonder Boy, or add a refreshingly distinct platformer to your collection, Wonder Boy Collection is the perfect package for you!

Throughout the 1980s and 1990s, the adventures of Wonder Boy have delighted gamers of different generations and built up a huge following all over the world with their dazzling blend of energetic platforming and action-RPG.

To celebrate the legacy of this iconic game series, we are creating a carefully curated collection of essential titles of the Wonder Boy series, precisely ported to today’s home consoles and including extended features!

With the the Wonder Boy Collection (Nintendo Switch/PS4), Wonder Boy fans get a total of four games of one of the most influential series from gaming’s past:

So that's why Monster World IV original was exclusive to the physical editions of the remake.
You must log in or register to reply here.

RoboEight replied
Jun 5, 2021
A Light in the Dark coming to PS4, Switch this fall