News Community Retro A lost Maxis SimRefinery has been discovered by an Ars reader, uploaded for all 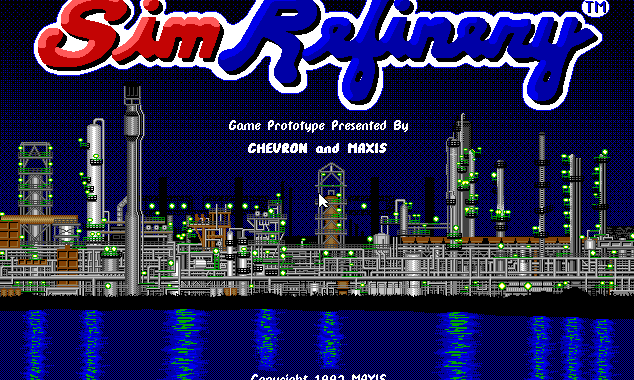 The clearly incomplete prototype was uploaded to archive.org, then removed.


We at Ars Technica are proud to be members of video game archiving history today. SimRefinery, one of PC gaming's most notoriously "lost" video games, now exists as a fully playable game—albeit an unfinished one—thanks to an Ars Technica reader commenting on the story of its legend.

Two weeks ago, I reported on a story about Maxis Business Solutions, a subdivision of the game developer Maxis created in the wake of SimCity's booming success. Librarian and archivist Phil Salvador published an epic, interview-filled history of one of the game industry's earliest examples of a "serious" gaming division, which was formed as a way to cash in on major businesses' interest in using video games as work-training simulators.

As Salvador wrote in May:

Oil refineries are really, really complicated. That’s why Chevron wanted Maxis to make them a game like SimCity, to teach the employees at their oil refinery in Richmond, California how it all worked.
To be clear, they didn’t want a game that was supposed to accurately train people how to run an oil refinery or replace an education in chemical engineering. That would’ve been incredibly dangerous. What they wanted instead was something that showed you how the dynamics of the refinery worked, how all the different pieces invisibly fit together, like SimCity did for cities.
Click to expand...

But while Salvador gathered a lot of information about how the resulting game SimRefinery worked—and how it let users recreate SimCity-caliber disasters within its refinery simulation—he was unable to turn up any working copies. "Nobody held onto SimRefinery because it didn’t seem important," he wrote. "It was a one-off, somewhat unsuccessful training program for an oil refinery in California. In the grand scheme of Maxis, it was one of their least important titles, which has only now become an object of interest in the video game community because of its unavailability."

Unsurprisingly, the savvy, computer history-minded readers of Ars Technica took this proclaimed rarity as a challenge, and a new user signed up to comment on the article with an intriguing image upload: an apparent copy of SimRefinery on a single 3.5-inch disk, labeled only with the game's title in Times New Roman and a black-and-white Maxis logo. The anonymous user, who goes by the username "postbebop" and has so far not replied to our requests for comment, credited the disk to a "retired chemical engineering friend" who had work experience at Chevron in the early '90s.

After teasing a plan to recover the disk's contents and upload them to archive.org, postbebop went silent. Until today!

The anonymous Ars user returned to our comments section on Thursday to confirm that they'd uploaded the disk's contents, after an apparently annoying extraction process, to archive.org for everyone in the world to download and play. The above gallery is a peek at how the incomplete prototype version of the game functions as emulated using DOSBox. While that archive.org link will let interested users play the prototype in any Web browser, the full game download also includes an intro.bat file; booting that with an application like DOSBox will play a pre-recorded demo of how the game is meant to function. This demo has a few explanatory prompts, but it also has long, unexplained pauses, perhaps meant for a live demonstration by MBS staffers to interested Chevron managers.

Since many of the on-screen buttons don't function properly and the disk doesn't include anything in the way of instructions or documentation, understanding exactly what works in this incomplete build of SimRefinery is still quite vague. For now, we know that you can use the game's menus to mix "recipes" that include potentially explosive compounds like C4 and MTBE. A peek at Salvador's Twitch stream of the game revealed at least one apparent fire, along with calamities like "regenerator upsets," which he created with help from his most engineering-minded chat members.

So, yes, chaos is certainly possible within this incomplete version of SimRefinery, which Salvador's article would remind you was a major point of the software: "If you start breaking the refinery, you can see how ruining one part of the plant will affect the other parts of the plant," he wrote. We heartily invite all of you to fiddle with the prototype and cause as much intentional—and absolutely educational—refinery destruction as possible.
Reactions: Rentahamster, CrustyBritches, Tesseract and 4 others

Thanks for the thread poops

Love stuff like this
Last edited: Jun 5, 2020
Reactions: IbizaPocholo
A

This is awesome... Classic Maxis was so damn good.

That was a good read. Cool shit, thanks for sharing! Makes you wonder how much other stuff is out there on floppy disks and the like.
Reactions: IbizaPocholo

Once I saw that thumbnail with that PC, I knew it was Clint from LGR.
This is awesome. I might give it a try this weekend.
Last edited: Jun 5, 2020

Cheers, gonna watch soon, super cool find!
You must log in or register to reply here.